Death around every turn in the mine tunnel. 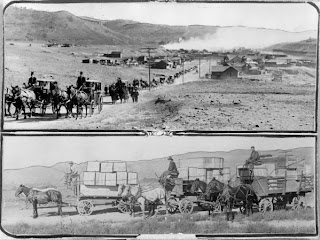 It was mining, of course, the brought the big rush to Colorado in the first place.  Gold, and then silver miners, flooded into the state from the east in 1859. But the dangerous business, violent surroundings, and unhealthy lifestyle also sent many packing for the pearly gates.
And mines beget more mines. With the influx of people and the need for power and heat, development of massive coalfields in several areas of the state occurred. With coal mining came more death.
“Early coal mining in Colorado was extremely dangerous, and the state had one of the highest death rates in the nation,” according to Miningartifacts.org.  “During the three decades from 1884 to 1914,  more than 1700 men died in Colorado's coal mines."
As in many other states, there was no organized reporting of mine fatalities initially, but in 1884 the death of 59 miners at the Crested Butte coal mine in Gunnison County, brought about legislation in the state requiring mining companies to report their accidents.
But just because the mine companies had to report them, it didn’t mean the deaths and mining accidents stopped occurring – quite the contrary.
Of particular note was the string of bad luck experienced in Las Animas County in 1910.
“On the last day of January, 1910, 35 of the 110 men in Primero mine had already walked out of the mine and another four were in the portal mouth when an explosion shot out of the portal. Three of these four were killed when they were hurled against a set of moving coal cars. One man inside was found alive. The last of the bodies was found three and a half months later for a total of 75 dead,” according to Sangres.com (Your Daily Dose of the Mountains.)
“Then, at ten o'clock on the night of October 8 that same year, 56 were killed by a dust explosion in the Starkville mine. Only a month later at Victor-American's number three mine at Delagua, 79 more were killed, three of these killed by flying rocks and timbers outside the portal. After a four month lull, Cokedale blew; and then Hastings on June 18, 1912. Twelve men were killed by an explosion caused by a defective safety lamp carried by the fire boss. Hastings was to have yet a worse day before the end of the decade.” On April 27, 1917, a fire at the Victor American Hastings Coal Mine in Hastings left 121 miners dead.
But it wasn’t just mining that could get you killed. Organizing and unionizing proved to be deadly for some miners and their family as well. In the notable examples of Ludlow in April of 1914, and the Columbine Mine massacre in 1927, the Colorado National Guard or the Mine Owner’s machine guns could take you out.
In Ludlow, deaths occurred during a night attack by the Colorado National Guard after a day-long fight between strikers and the Guard. The massacre resulted in the violent deaths of between 19 and 25 people; sources vary, but all sources include two women and eleven children who were asphyxiated and burned to death under a single tent.
In the case of Columbine Mine, A fight broke out between Colorado state police and a group of striking coalminers. Machine guns were used by the police, or by guards working for the mine (it is not clear which), against the unarmed miners and six strikers were killed. Many more were injured.
Add all that to together with the threat from silicosis if you were a hardrock miner, or black lung disease for coalminers, and general dynamite and equipment accidents – an earlyday Colorado miner didn’t stand much of a chance for a rocking chair passing.
The morticians and the coffin builders did booming business in the camps around the state.
###
Photo info: Two images in Las Animas County, Colorado. Top image shows a long funeral procession with carriages, drivers with top hats, horses, and people on foot; a fire, from a mine disaster, shows beyond the town; bottom image shows wagons piled high with wooden coffins. Western History/Genealogy Dept., Denver Public Library.