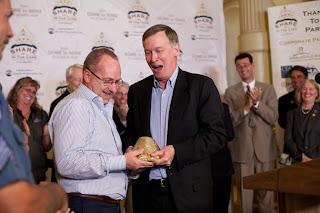 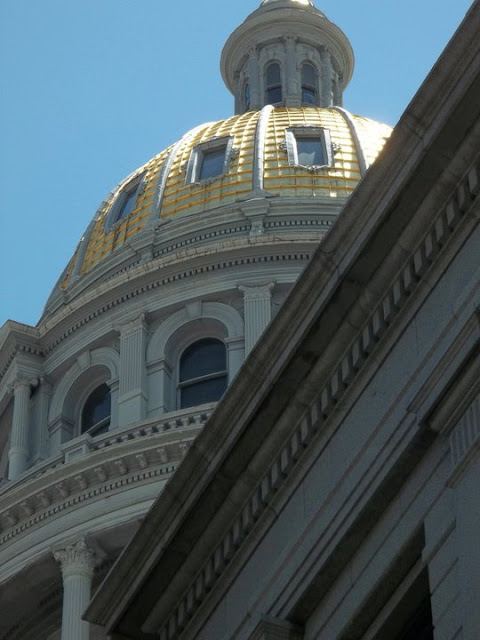 Times are tough, but thanks to the mine and the casinos, at least we can afford gold for the roof over our head.
Last week, Cripple Creek & Victor Mining delivered a 72-ounce, solid, gold button that will be used to produce gold leaf for Colorado the Capitol Dome. At current prices, that is nearly $130,000 worth of gold.
“The dome now needs $17 million in urgent repairs that the state doesn’t have to spare, and gold is once again booming, with prices near all-time highs,” according to a Sept. 23 story by Kirk Johnson in the New York Times.
“It’s your gold,” Mark Cutifani, the chief executive of AngloGold Ashanti, the parent company of CC & V, was quoted in the Times. Cutifani handed over the gold to Governor John Hickenlooper at a ceremony at the Capitol. The company has owned CC & V Mining since 1999 and averages as much as 700 ounces of gold a day at its operation between Cripple Creek and Victor. It is the largest private employer in Teller County.
“But in another twist of history, much of the real money for the building’s broader repairs could also come, indirectly, from the once-moldering old mining towns themselves.”
The Times piece cites the gambling tax that goes to a statewide historic preservation fund that state lawmakers used to begin the restoration process last year. Colorado Preservation, Inc. is pushing to restore the fund, which they say will be exhausted if it has to pay for the entire project. The effort has already raised $1.3 million (including the mine’s contribution) in mostly in-kind donations and some small cash collections.
The repairs will concentrate on the painted and gilded metal-clad areas and is expected to be completed in mid 2014.