Lasting legacy with a matte glaze 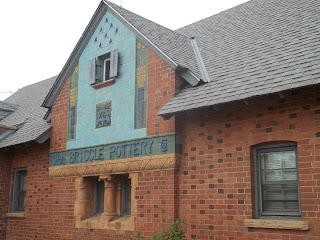 All the best with Van Briggle pottery

At one time, it was in all the best houses in the area. Maybe in tiles near the fireplace, or matte glazed vases in the tony Victorian parlors, or a set of candle holders upon the mantle ...

Until just a few years ago, Van Briggle Art Pottery was the oldest continuously operating art pottery in the United States, having been established in Colorado Springs, Colorado in 1901 by Artus and Anne Van Briggle.

When I first lived in Colorado Springs in the late 1990s, our family would visit what was once the old Midland Round House on 21st Street and U.S. Highway 24 — which at that time, still housed Van Briggle Pottery. It was possible then to catch them at the wheel "throwing a pot." 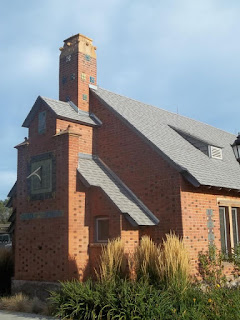 The Art Nouveau style favored by its founders continues to influence the pottery's designs today.

The historic 14-stall railroad roundhouse in Colorado Springs was also on my way to work, for years as  I managed papers later in Manitou Springs and Woodland Park. The building was originally built and operated by the Colorado Midland Railroad which was founded in 1883 but the roundhouse dates from 1887-88. 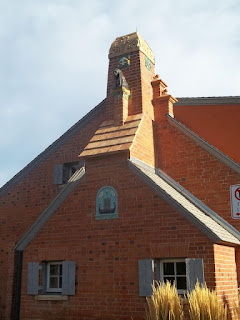 "Van Briggle Pottery purchased the roundhouse in 1955 and renovated the building with interior partitions, office space and pottery plant. They called it their Midland Plant. Van Briggle prospered at the location for over 50 years until they moved to a new location in November 2008. The size of the roundhouse had become a burden on the business and the owners wanted to downsize. They reopened at 1024 S. Tejon Street in May 2009," according to information from the company at the time.

"Artus Van Briggle settled in Colorado Springs in 1899 after establishing himself as a notable artist with the Rookwood Pottery of Ohio. With Anne Louise (née Gregory), his new wife, Artus began exploring the Art Nouveau style in their pottery creations, drawing awards and accolades from the American and European art communities. Although he was a talented painter who had displayed and won awards in Europe, from 1899 until his death Artus devoted himself almost exclusively to the craft and art of pottery." 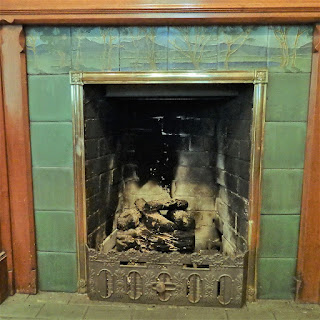 In 1899, struggling with health issues due to tuberculosis, Artus had left Rookwood and moved to the drier air of Colorado Springs.

"Upon befriending the Holmes family of Chico Basin, he stayed at the HOP Ranch during the summers of 1899, 1900, and 1901 to reduce work stress and regain strength while pursuing his own styles of pottery, centered around the Art Nouveau movement. He continued his research on the ancient matte glazes that fascinated him in Paris. After two years of trials and experiments a matte glaze was perfected. One of the matte glazes perfected by Artus was the matte blue glaze, based on an ancient Chinese process that had long been lost to history,"

"Artus opened Van Briggle Pottery in 1901 and was joined by Anne Gregory, who took a position as a high school art teacher in Colorado Springs. In 1903, Artus Van Briggle was appointed First Director of the Department of Art and Design in Colorado College, succeeding Louis Soutter, a Swiss artist (born in Geneva, Switzerland) he met in Paris in 1895," according to Colorado College information.

"In 1902, Anne and Artus were married, and she devoted herself to their pottery; she created designs and collaborated in all aspects of the enterprise with her husband. Late 1902 brought Van Briggle awards for his glazes and designs in Art Nouveau from the prestigious Paris Salon; he was now an accepted artist. During their early years, Artus and Ann established hundreds of Art Nouveau styles of pottery under the Van Briggle name. The Despondency vase won Van Briggle wide acclaim and first place at the Paris Salon in 1903. A display at the 1904 Centennial Exhibit in St. Louis won Van Briggle more awards and greater international fame," says the college. 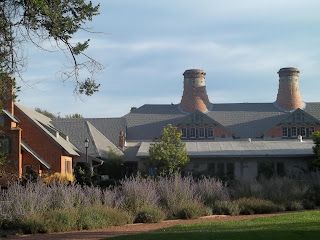 Artus Van Briggle died in July 1904, at the age of 35. Anne continued the pottery using the forms created by Artus as a foundation and adding more designs of her own. In 1907, Anne and pottery stockholder and city-founder William Jackson Palmer began construction on a new pottery on Uintah Street. The Van Briggle Memorial Pottery — designed by Dutch architect Nicholas Van den Arend — was opened in 1908 and stands today as an historic landmark noted for its architecture and use of ceramics in the facade.

Having remarried in 1908, Anne Louise Gregory Ritter leased the pottery in 1912 to Edmund deForest Curtis, who ran it until 1916 She sold the company in 1922 to J.F. and I.H. Lewis and moved to Denver the following year, where she would concentrate on painting and where she remained until her death in 1929.  In her absence, the pottery suffered financial hardships and was sold at sheriff's auction; then resold,  once more returning to possession of Curtis. 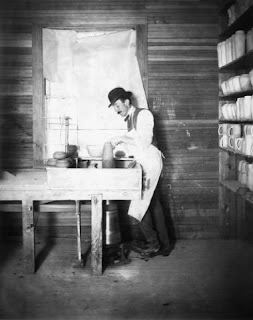 "The pottery was sold twice more in the ensuing decade and survived a fire in 1919 that gutted the interior but left the brick shell and kilns. New owners I.F. and J.H. Lewis took the opportunity to modernize and expand the facility beginning in 1920 and stabilized the production and financial aspects of the pottery for the first time. Despite damage from the flood of 1935—the most destructive flood in Colorado Springs history— that destroyed much of the company's records and molds, the pottery continued to enjoy success up to World War II, when they closed for approximately three years as the United States focused its resources on the war effort,"

"With the increase of interstate travel in the United States a freeway was planned in 1953 for Colorado Springs which J.H. Lewis estimated would run through the Memorial Plant site. Although the freeway eventually was planned to avoid destroying the historic pottery, Lewis put relocated the pottery to a higher-traffic area of Colorado Springs. In 1955, Lewis and Clem Hull brought a new facility on line at a renovated railroad roundhouse on Midland Road. The new facility, known as the Midland Plant, had a smaller capacity but enjoyed quick success due to its location on the main highway to the Garden of the Gods and other tourist locations." 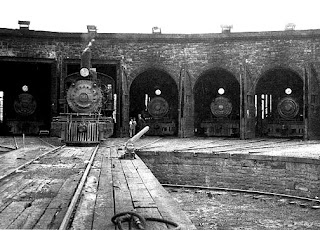 In 1968, Lewis sold the Memorial Plant to Colorado College, and it fell into disrepair for the ensuing 40 years, being used variously as offices and storage, according to information from the school, school information indicates.

Van Briggle's Art Nouveau designs and distinctive matte glazes were awarded high honors from prestigious sources, including the Paris Salon, the Saint Louis Exposition, the Lewis and Clark Centennial Exposition, and the American Arts and Crafts Exhibition in Boston.

Photo 1: From 1908 to 1968, the building operated as a pottery factory producing thousands of ceramic art and architectural pieces. The building stands today at Southeast of the intersection of West Uintah Street and Glen Avenue in Colorado Springs.

Photo 2: The pottery building originally housed the salesroom, administrative offices, studios, kilns, workshops, and other functional rooms of the manufacturer and was designed to display the wares produced inside. Designed by Dutch architect Nicolaas van den Arend in a picturesque manner displaying Flemish farmhouse and Arts and Crafts influences, the building provides an overall impression of solidity, bright colors, and varied shapes and textures.

Photo 3: Traditional Van Briggle work around the fireplace at the Burgess House at Colorado College.

Photo 4: The distinctive building served as an advertisement for the company and its image appeared on its promotional materials and letterhead. The walls are composed of red brick with many blackened headers, laid in Flemish bond with white mortar, and enlivened with thousands of polychrome Van Briggle tiles and terra cotta ornaments placed to display their architectural use in decorative panels, chimney caps, window features, and even a sculptural cat and a gargoyle.

Photo 5: Today, the property is owned by Colorado College, whose historic campus lies to the east; its Facilities Services Department occupies the pottery building.

Photo  6: A potter practicing the craft at Van Briggle in the early days.

Photo 7: The old Midland Round House.

We own several beautiful Van Briggle pieces including tiles.

Thank you again for your wonderful story.