What are the chances of being murdered on America's Mountain? 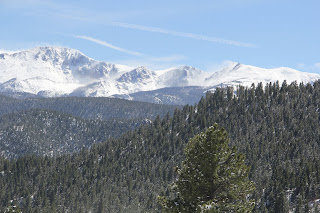 Not out of the question to face foul play at above 14,000 feet

Pikes Peak can be a dangerous place. Today, you can wreck your car on the highway. Many have.  You can have a heart attack climbing, or perish because of altitude sickness, or have any number of bad things happen up there on  one of the more accessible 14ers in nation. But what are the chances of being murdered on America's Mountain?
Turns out, it is not out of the question.
From early records, as reported in New York Times, August 9, 1860, on Page 2 of the New York edition with the headline: Life at Pikes Peak:  TWO MURDERS IN THREE DAYS, A VIGILANCE COMMITTEE.
"The Rocky Mountain News, of the 25th, gives full details of several murders lately committed at Pikes Peak. One of the guilty parties was JAMES A. GORDON, who became engaged in a quarrel with the barkeeper of a saloon where he had been indulging freely in liquor, and finally shot him, inflicting a dangerous wound. This outrage he followed up, on the next day but one, the 16th, of July, by shooting and instantly killing one GANTZ, another barkeeper in the same town. Then GORDON thought it was time to put himself beyond the reach of the law. No one started in pursuit until the next morning after the murder had been committed, and then all efforts to arrest the scoundrel proved unavailing," the paper reported, according to the other paper.
But there is more: