Internal rot and the trouble with conspiracies 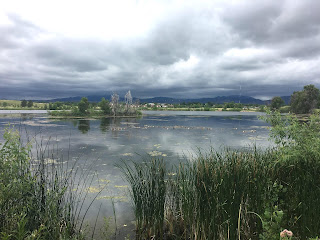 Postcard from the swamp


By Rob Carrigan, robcarrigan1@gmail.com
A common definition for conspiracy is a secret plan by a group to do something unlawful or harmful.
A conspiracy theory may involve common things like famous deaths, government activities, new technologies, terrorism and questions of alien life. Among the longest-standing and most widely recognized conspiracy theories are the assassination of John F. Kennedy, the 1969 Apollo moon landings and the 9/11 terrorist attacks, and alleged plots for world domination by various groups both real and imaginary.
I thought about that today when I noticed a meme on FaceBook circulating that said "I hope that everyone understands. We are in a civil war in America. Media and the Dems are trying to overthrow our government."
Sounds like a conspiracy, but I have been known to consort with both (Media and Dems), so I thought about not saying anything, keeping my head down, and continuing to go about my business, even it includes the media and democratic ideals.
Dan Brown, in writing The Da Vinci Code, understood that.
“Everyone loves a conspiracy,” he said.
“The main thing that I learned about conspiracy theory, is that conspiracy theorists believe in a conspiracy because that is more comforting. The truth of the world is that it is actually chaotic. The truth is that it is not The Iluminati, or The Jewish Banking Conspiracy, or the Gray Alien Theory. The truth is far more frightening - Nobody is in control. The world is rudderless,” says Alan Moore, English writer most famous for his influential work in comics, including the acclaimed graphic novels Watchmen, V for Vendetta and From Hell.
“There is a theory going around that the U.S.A. was and still is a gigantic Masonic plot under the ultimate control of the group known as the Illuminati. It is difficult to look for long at the strange single eye crowning the pyramid which is found on every dollar bill and not begin to believe the story, a little. Too many anarchists in 19th-century Europe—Bakunin, Proudhon, Salverio Friscia—were Masons for it to be pure chance. Lovers of global conspiracy, not all of them Catholic, can count on the Masons for a few good shivers and voids when all else fails,” wrote American writer Thomas Pynchon in Gravity's Rainbow.
Every side might engage in development of such theories. Right wing, left wing. The enemy outside, within, above and below, to name a few.
Researcher Harry G. West and others have noted that while conspiracy theorists may often be dismissed as a fringe minority, certain evidence suggests that a wide range of the American population maintains a belief in conspiracy theories.
“Where justice is denied, where poverty is enforced, where ignorance prevails, and where any one class is made to feel that society is an organized conspiracy to oppress, rob and degrade them, neither persons nor property will be safe,” said Frederick Douglass, who was born a slave and became a renowned abolitionist, editor and feminist.
But there I go again. I have quoted heavily-debated members of the media, writers and researchers, and other ideas that I consider ignorant idiocy.
"He must be in on the conspiracy," some might say.
I don't think so.  Besides, if I was, wouldn't I employ puppet politicians, or be calling for civil war, Masonic or Catholic purges, questioning the facts of widely reported events, or seeking perhaps total domination of world markets?
Here I am. Just trying to discredit silly ideas about conspiracy and incorrect information. Another duck floating out there on the surface of the swamp. No ambition, I guess.

Who knew a little linebacker might be a deep thinker