Don't let it come up behind you

Listen now to all the fire precautions 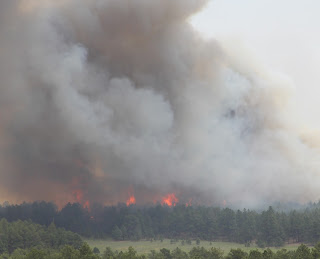 When I looked at the National Interagency Fire Center’s statistics across the country, nationally, there are 115 large fires being managed under a strategy other than full suppression. That does not include fires within complexes. For Colorado, as of Aug. 25, 2018, there was 10 large fires burning in the state.
Three new large fires were reported yesterday. Firefighters continue to work on the 115 large fires that have burned 2.2 million acres in 14 states.
By their definition, a large incident is a wildfire of 100 acres or more occurring in timber, or a wildfire of 300 acres or more occurring in grass or sage.
“During wildfires, the team also sometimes works with the U.S. Forest Service to deploy mobile monitors in areas where they expect the greatest smoke impacts,” said release from the Colorado Department of Public Health and Environment.
Early in the wildfire season, in early July, drought-plagued Colorado outpaced all other U.S. states when it comes to the number of actively-burning wildfires, according to federal statistics.
Nearly a third of the 47 wildfires actively burning across the country were in Colorado, then, according to the U.S. Forest Service. The state’s 10 actively-burning wildfires don’t include previously-extinguished fires.
Since then, devastating fires in California have increased the pace there.
Triple-digit temperatures are fueling fast-moving, aggressive wildfires across the Golden State at a pace that far out-does that seen at this point in a typical season, fire experts tell TIME. More than 1,000 wildfires have been sparked in a one-week period in July — that’s more than three times the average 250 or 300 that begin each week at this point in the season, according to the California Department of Forestry and Fire Protection, or Cal Fire. Tens of thousands of more acres have burned across the state this year than at this point in 2017, which was one of the most destructive fire seasons in state history.
"A seemingly never-ending heatwave has put many cities in the state on track to set records in July — and that’s just part of the issue. Each year brings some new heat record in California, and the accumulation of year after year of sweltering summers has created dry grass, brush and millions of dead trees that spread fires at explosive rates. And this summer in particular, heat waves have exacerbated the issue," Time reported in July.
If you encounter heavy smoke, the Public Health in Colorado, advises you to remain indoors with the windows and doors shut.
“If you live within an area with high levels of smoke in the air, you can determine if the levels are unhealthy by focusing on a landmark five miles away. “If you can no longer see that landmark, the air is unhealthy to breathe,” the Colorado Department of Public Health advises.
And as noted expert on fire behavior Tom Watson says, “With a structure fire you know where your flames are, but in the woods it can move anywhere; it can come right up behind you...”
Posted by ___ Restless Native at 5:45 PM