A million dollars, still right there in the ground?

Boom, bust, before the boom, and then the bust 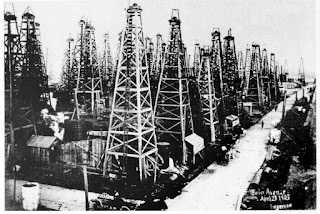 
The highest-ever recorded national average price a gallon of regular unleaded gasoline was $4.114, recorded by AAA, on July 17, 2008. The average price last week was $2.265, for the same fuel, according to the same source. As consumers, we are now cruising on low gas prices. While much of the oil and gas industry has survived an especially tough few years with weak demand and low prices.

But fortune has come and gone before.

Locally, it brings to mind the idea that we once had our “gusher” in the Pikes Peak area, and along with it, our own “oil and gas patch.”

“The first whispers of oil in Old Colorado City were heard as early as the 1880s and were ephemeral and delicate but insistent,” wrote Inez Hunt in the first Occasional Papers produced by the Pikes Peak Posse in 1979.

“The oil wealth that poured out in Florence, Colorado, encouraged dreamers to try their luck. Along Oil Creek, near Canyon City, there were occasional small holes which seeped a smelly but tantalizing black trickle of crude into the stream.”

Perhaps being fanned by a hopeful newspaper editor in old Colorado City, the flames of oil passion spread like a gasoline fire as The Iris newspaper in that town reported that 48 prominent citizens had already purchased stock, leases had been signed, and drilling was set to start immediately.

“The year of 1894 seemed to be one of destiny to the oil promoters. Operations of the first well began officially on March 18. The well was named the Iris Well No. 1, to honor one of the most loyal supporters of the project, W.P. Epperson. Epperson was an important civic leader, editor, and owner of the Iris, a man well-educated from Illinois. He held the position of police judge and also took special interest in the fire department. As the owner and editor of The Iris, he was able to see that the city was kept informed of the front-page action at the drilling site. He was soon appointed manager of the project. He was a born promoter,” wrote Hunt.

“Prosperity was in sight for the city, the belief was strong that property owners, the stock owners, everyone would profit. Premature predictions that gas would be sold to future mining mills to roast Cripple Creek ores were conjured up again. Also there was talk of a railroad between Cripple Creek and Colorado City by way of Bear Creek. The oil company no longer begged for buyers of stock. It planned to sell only enough to pay for maintenance; the profits would be divided by fewer people.”

Though Epperson was able to produce enough natural gas to run his own home heating and cooking needs, investors eventually became disinterested when no oil was produced.

“Hard luck dogged Epperson. He tried to persuade the investors to allow him to drill up near the Trenton limestone strata. The investors were growing tired of feeding money into seemingly endless maws of wells that produced only paper certificates,” Hunts paper says.

Epperson never completely gave up on the possibility of striking it rich in the oil business, but eventually chased other projects including mining interests, a trunk and harness store, and other ventures.

His final comment in The Iris, before he moved on to Utah 1909 was, “There is a million dollars, still in there.”
Posted by ___ Restless Native at 6:19 PM