Federal presence contributes greatly to who we are 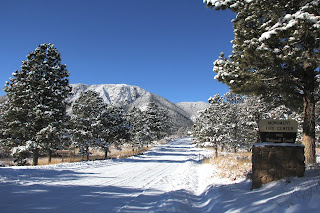 No matter what you think of that, businesses locally, and all over the state, benefit greatly from that presence

The federal government owns 28 percent of all U.S. land.
Here in the West, far more than that is owned by federal agencies.
In Colorado, 35.9 percent of the state is federally owned, making it only #9 in the ‘top ten of federal ownership’ behind (in order) Nevada, Utah, Idaho, Alaska, Oregon, Wyoming, California, and Arizona. New Mexico comes in at #10.
No matter what you think of that, businesses locally, and all over the state, benefit greatly from that presence.
In Colorado, according to figures from the state, 7,800 outdoor recreation firms, employing 177,700 people, for a $6 billion annual payroll, contribute in the private sector. In addition, 90 percent of Coloradans participate in some form or other of outdoor recreation here in the state.
“The federal government owns roughly 640 million acres, of the 2.27 billion acres of land in the United States. Four agencies administer 608.9 million acres of this land: the Bureau of Land Management (BLM), Fish and Wildlife Service (FWS), and National Park Service (NPS) in the Department of the Interior (DOI), and the Forest Service (FS) in the Department of Agriculture. Most of these lands are in the West and Alaska. In addition, the Department of Defense administers 14.4 million acres in the United States consisting of military bases, training ranges, and more. Numerous other agencies administer the remaining federal acreage,” according to a Congressional Research Service report  “Federal Land Ownership: Overview and Data” by  Carol Hardy Vincent, specialist in natural resources policy,  Laura A. Hanson, information research specialist, and Jerome P. Bjelopera, specialist in organized crime and terrorism, submitted Dec. 29, 2014.
Four land agencies are managed for many purposes, primarily related to preservation, recreation, and development of natural resources.
The BLM has a multiple-use, sustained-yield mandate that supports a variety of uses and programs, including energy development, recreation, grazing, wild horses and burros, and conservation. The FS manages for multiple uses and sustained yields of various products and services, including timber harvesting, recreation, grazing, watershed protection, and fish and wildlife habitats. The FWS manages primarily to conserve and protect animals and plants. The National Wildlife Refuge System includes wildlife refuges, waterfowl production areas, and wildlife coordination units. The NPS to conserve lands and resources and make them available for public use. Activities that harvest or remove resources generally are prohibited, the report says.
In fact, the federal government owns 46.9 percent of the 11 coterminous western states.
“By contrast, the federal government owns 4 percent of lands in the other states. This western concentration has contributed to a higher degree of controversy over land ownership and use in that part of the country,” according to the report.
Interestingly, federal land ownership by the five agencies has declined by 23.5 million acres since 1990, from 646.9 million acres to 623.3 million acres. Much of the decline is attributable to BLM land disposals in Alaska and also reductions in DOD land.
Here in Colorado, private landowners also play an important role in the stewardship of Colorado’s forest resources. Approximately 186,000 private landowners control 30 percent or 7.1 million acres of the state’s forested landscapes. Although the majority of these lands are in lower elevations, private landowners are represented in all of Colorado’s forest types, including a notable portion of aspen and mixed-conifer forests, according to figures from the Colorado State Forest Service and Colorado State University.
“The remainder of Colorado’s forests is held by a combination of tribal governments, municipalities, state agencies and other non-federal entities. The Colorado State Land Board, for example, owns approximately 370,000 acres of forest land throughout the state; the largest parcel is the Colorado State Forest near Walden. Two resident tribes, the Ute Mountain Utes and Southern Utes, make their home in southwest Colorado where they own a total of 402,303 acres of forestland. The vast majority of these acres are in ponderosa pine and piñon-juniper forests. These tribes also retain specific hunting rights and other aboriginal rights on national forests throughout their traditional territory, which includes portions of Utah, New Mexico and Colorado. More than a dozen other tribes located outside Colorado also maintain tribal interests and inherent aboriginal rights in Colorado’s national forests.” says Colorado State Forest.
I am reminded of of a quote by Teddy Roosevelt about the importance of the gift we enjoy, just by living here.
“If in a given community unchecked popular rule means unlimited waste and destruction of the natural resources — soil, fertility, waterpower, forests, game, wildlife generally — which by right belong as much to subsequent generations as to the present generation, then it is sure proof that the present generation is not yet really fit for self-control, that it is not yet really fit to exercise the high and responsible privilege of a rule which shall be both by the people, and for the people.”
Posted by ___ Restless Native at 2:54 PM