Conversations on the Cripple Creek Strike 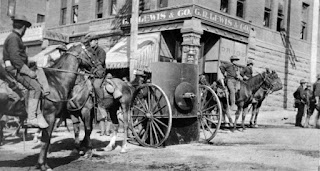 You know you have started a good conversation when they are still talking about it, and arguing about the details, more than 110  years later.


Several years ago, historian Richard Myers of Denver called my attention to the following information.

“It appears to be smoking gun material,” said Myers about two members of the Colorado militia efforts to shed further light on the “Black Time” of striking Cripple Creek miners, one of them a commissioned officer, Major Francis J. Ellison.

“The Colorado National Guard not only covertly took the side of the companies against the unions (as even Sherman Bell once asserted), they also engaged in routine beatings, systematic illegal expulsions of strikers, probable voter fraud committed in favor of the Republican ticket, and they coordinated their activities with mobs directed by local Republican leadership,” Myers postulated.

“But the Colorado National Guard had a problem. Major Ellison was a principled officer who continuously tried to do the right thing, even when it must have been obvious that all other officers were routinely committing criminal acts, and that their intent was to prevent him from hindering their plans. They assigned him to Denver during the general election. But he worked against the National Guard's general officers' schemes during the election. For example, when other National Guard elements were reporting that there was a partisan mob evicting Republican poll watchers and attacking the National Guard elements protecting the Berkeley precinct (in downtown Denver) to which Ellison had been ordered to proceed, Ellison reported that no such mob existed,” he suggested.

“The other officers and troopers, equipped with riot guns but in civilian clothing, excluded him from a subsequent action, having filled an automobile so that there was no room for him. They shipped him back to the Cripple Creek District, where depravations continued, and where he continued to be at odds with other officers.”
The officer, Major Francis J. Ellison, has sworn to the following affidavit: State of Colorado, City and County of Denver—Francis J. Ellison, being first duly sworn, upon his oath deposes and says:

“That on the 12th day of December, 1903, at the request of  Adjutant General Sherman M. Bell, I went to the Cripple Creek district on special military duty, and from that time have been continuously in the service of the State, both in the Cripple Creek district and in the Trinidad district. When General Bell first sent me to Victor I offered him certain evidence in regard to the perpetrators of the Vindicator explosion, which he has failed to follow up, but which would have led to the arrest and conviction of the men who are responsible for the placing of that infernal machine. At about the 20th of January, 1904, by order of the adjutant of Teller County military district, and under special direction of Major T. E. McClelland and General F. M. Reardon, who was the Governor's confidential adviser regarding the conditions in that district, a series of street fights were commenced between men of Victor and soldiers of the National Guard on duty there. Each fight was planned by General Reardon or Major McClelland and carried out under their actual direction.”

Ellison’s testimony at this point becomes violently graphic of what were the Guard’s orders.

“Major McClelland's instructions were literally to knock them down, knock their teeth down their throats, bend in their faces, kick in their ribs and do everything except kill them. These fights continued more or less frequently up to the 22nd of March. About the middle of February General Reardon called me into Major McClelland's office and asked me if I had a man in whom I could place absolute confidence. I called in Sergeant J. A. Chase, Troop C, First Cavalry, N. G. C., and, in the presence of Sergeant Chase, he stated to me that, owing to the refusal of the Mine Owners' Association to furnish the necessary money to meet the payroll of the troops, it had become necessary to take some steps to force them to put up the cash, and he desired me to take Sergeant Chase and hold up or shoot the men coming off shift at the Vindicator mine at 2 o'clock in the morning.”

The violence was to escalate, according to Ellison’s testimony.

“I told General Reardon that I was under the impression that most of these men caught the electric car that stopped at the shaft house so that such a plan would be impracticable. He then said to me that the same end could be reached if I would take the sergeant and fire fifty or sixty shots into the Vindicator shaft house at some time during the night. Owing to circumstances making it impossible for Sergeant Chase to accompany me, I took Sergeant Gordon Walter of the same troop and organization, and that same night did at about 12:30 o'clock fire repeatedly into the Vindicator and Lillie shaft house. Something like sixty shots were fired from our revolvers at this time. Afterwards we mounted our horses and rode into Victor and into the Military Club, reporting in person to General Reardon and Major McClelland. The next day General Reardon directed me to take Sergeant Walter and look over the ground in the rear of the Findlay mine with a view of repeating the performance there, but before the plan could be carried out, General Reardon countermanded the order, stating his reason to be that the mine owners had promised to put up the necessary money the next day, which, as a matter of fact, they did. General Reardon, in giving me directions regarding the shooting up of the Vindicator shaft house, stated that Governor Peabody, General Bell, he himself, and I were the only ones who knew anything about the plan.”

Meyers holds that the above testimony shows how bad things were.

“The National Guard intentionally looked the other way when union men were being harassed and beaten. They stood down in their barracks in order for such attacks to go unmolested by soldiers on duty. They purposely avoided collection of any information that could have led to the arrest of mobs committing crimes … and carrying out terror attacks from robberies to expulsions to beatings to theft to trashing union cooperative stores. His testimony is substantiated by others,” Richard Meyers said.