Bear hind sight near perfect as we approach 2020 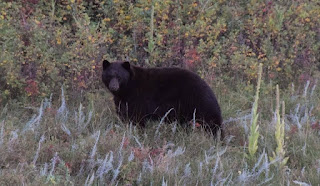 One Cherokee clan called themselves the Ani Tsa'gu hi.  It is told that a young boy of the clan kept disappearing into the forest only to return to the village a little hairier each time. The elders of the tribe ask the boy what was going on, the youngster acknowledge that he had been spending time with the bears of the forest sharing their foods and ways, He told the elders the bears had plenty of food and that the rest of the tribe could join him rather than go hungry but first they would have to fast in order to prepare for the transformation.
Informing the other tribal clans, this Ani Tsa'gu hi clan chose to follow the boy and leave the human world of struggle and hunger behind and live forever with the Black Bears in their abundant forest.
Upon their departure from the known world of Cherokee towns and villages, the Ani Tsa'gu hi, informed all the other Cherokee clans of their departure, "We are going where there is much food. Do not fear to kill us, for we will be ever alive. "
It's not hard to imagine that there are some Cherokee living in the mountains today, who think descendants of the Ani Tsa'gu hi clan that might still be living in the mountain forest as Black Bears. There are also tales of how humans might be the descendants of Black Bears losing their fur and changing their ways.
__ from Blue Ridge Highlander

Hind sight for bear like me is always better as time goes on. It is near perfect, as we get closer to 2020. Almost every thing I know, I learned mostly in the little town of Dolores, Colo.
Today, the local police reported that fellow with my same name, and just about my age, had been killed down in the 400 block of St. Vrain Street, in Colorado Springs.

"Some grandfathers told the story of the great grizzly bear, who captured the Great Spirit Manitou's daughter and forced her to marry him. They had many children, who became the Ute Nation after the Great Spirit took his grandchildren back. To punish the grizzly, Manitou forced it to walk on four feet instead of two.
It is true that the Ute's venerated the grizzly bear above all others and celebrate the arrival of spring by having a great feast, and performing the Bear Dance, which shows the great bear coming out of hibernation and this announcing the arrival of spring, a time of rebirth."
__ from The Boy Who Slept With Bears, A Southern Ute Story, by George R. Douthit, III


"A recorder of what has been done is equal to the greatest hunter, the bravest warrior, or even the holy man," he said. "To be such a historian, such a recorder, you must learn to see all things, know how they look, and how they are done. You must see that the young colt swims on the downstream side of the mother, behind the wall of her body, and that the wind does not always push arrows of the just. As the hills of one's youth are mountains, and the hunts all seem fat after the meat is long eaten, so memory makes every man the bravest in his long-ago encounters, and the enemies faced in battle become very many as the warrior days retreat. The picture is the rope that ties memory solidly to the stake of the truth."
__ Picture Maker, member of the Lakota Nation from The Story Catcher, by Mary Sandoz.

It has been difficult at times. Just this week,  I lost a friend, and fellow story teller. They don't always give us enough yarn to stretch out into a long, comfortable tale with a happy ending.
The bear lives in a mean environment. Over time, he is witness to things that aren't fair. The truth is painful. Winter is coming.  You can't effectively train bears to dance, without taking some risks.
In general, the story of some of my bear friends has brought to me, great sadness.
But hind sight gets better as time goes on. Especially as we approach 2020.
The bear puts on weight for the expected long winter. Cranky and prone to growls, yes.  Hairy, smelly and awkward, yes. But easier to live with than a snake or coyote. And more entertaining, if you don't try to make him dance.