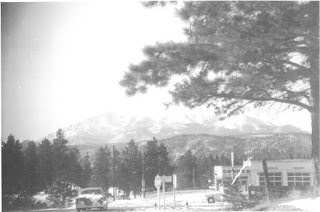 In the fall of 2015,  the Ute Pass Historical Society encouraged you to remember the days of full service locally in Woodland Park. “You may be fuming over the price of gas, but our Service with a Smile exhibit may put a smile,” according to a release from the organization encouraging you to experience, with smiling attendants, a clean windshield, and more.

Bob Maytag’s grandfather was the founder of the Maytag Co. of washing machine fame

In the heyday of the gas station economy locally, the Maytag Man owned and ran a filling station in Woodland Park.
Also involved in local and national Democratic politics, and serving as mayor of Woodland Park for three years in the early 1960s (1960 to 1963), Bob Maytag’s grandfather was the founder of the Maytag Co. of washing machine fame, and still lives in the Broadmoor area of Colorado Springs.
He also had interest in raising Hereford cattle on a ranch west of Divide and his son Russell, lives at West Creek.
The family summer home on Pine and Gunnison in Woodland Park was first built in the 1930s and actually burned before anyone could move in. Completely rebuilt, it was intended as a vacation spot and Bob himself, later lived just west of there from 1951 to 1961.
Service with a Smile, a current display at the Woodland Park Library, highlights the roadside phenomenon that helped create America’s car culture and features vintage artifacts and local photographs.
Gas stations first appeared in 1913, after the soaring popularity of the Model T and the breakup of Standard Oil. New oil companies and cheap gas led to America’s sudden mobility for travel. Advertising agencies wasted no time in developing recognizable branding for the consumer - Shell’s bright yellow scallop shell, Mobil’s flying horse, and many others. Did you “trust your car to the man who wears the star”?
“Perhaps your early driving memories include the enticement of trading stamps offered by S & H company (redeem for valuable merchandise!) and other station promotions and giveaways,” suggests Society literature. “And did you use the term filling station (popularized east of the Rockies) or service station (more common west of the Rockies)?”
As far as the Maytag legacy, a 2014 interview with Bob Maytag, conducted by Larry Black at City Hall in Woodland Park, offers clues to how it was “in the old days.”
According to a summary of the interview, Bob recalled when the Kennedys were here in the area in 1959.
“Did not see any togetherness here,” Bob Maytag was quoted in his interview with Black. John Kennedy coming to airport here at that time helped Bob’s interest in Democratic politics. Maytag said he had one term on the Democratic national committee and went to two conventions. When Bobby Kennedy ran for president, he was very active.
“I was there (in California) the night he got killed,” according to the interview summary.
Locally Maytag recalled wild times in this area.
“There was a lot of gambling … the big stuff … there was a house behind the house on the first start up the hill … that was the secret house, they had very sexy women there and activities … you had to be invited. Bert Bergstrom was very involved in that … the movers and shakers… it got raided and newspaper in Denver went in on it, took pictures … they loaded the stuff up … to Cripple Creek. It got raided on the way up there … took everything,” according to the interview summary.
“The whole era was different … Bert sold beer and wine … had his fingers in a lot of stuff and never went to jail.” 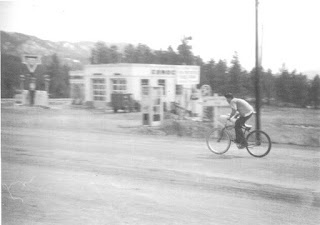