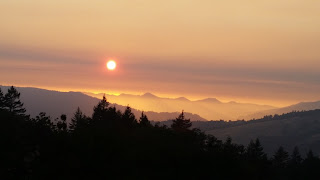 Crews from Divide, Cripple Creek, and Northeast Teller Fire Protection District, with firefighters from all over Teller County, have recently helped with fires in other states. Three things you should know about local firefighters helping with fires in other states. First, local resources can't be drawn down in any way, in nearby fire protection areas. Second, it is an excellent opportunity for training. And finally, without exception, the local crews want to give back or help out others, in case they need help with area fires in the future.
"Part of it, I think, is a desire to pay it forward," says Steve Menz, Divide Fire Protection District Engine Captain, the day after returning from a 21-day stint battling blazes in Northern California. "We saw firefighters in here from many different states during the Black Forest Fire and the Waldo Canyon Fire. If we have new fire, they will be here from all over, to help us."
"Local residents may be wondering, 'Well, who is watching the shop.' but the truth is, there are 20-25 other firefighters, and three other engines, that are ready to roll, just in our fire protection district."
The Divide Fire Protection District crew returning from California, was made up of two firefighters from the district,  Menz and Engine Boss Trainee Bradley Inscoe, its ‘Type 3’ four-wheel drive engine, and a crew member each from Coalition For Upper South Platte (Beth Neilsen), and the Colorado State Forest Service employee (Matt Matwijec).
The crew had just completed a 29-hour drive back last week, regulations only allowing them to drive 16 hours a day, when reached in Divide.
"We got about five miles to gallon," he said and they ran on the highway with about a third of a tank of water on to smooth the ride. But once they arrived, fuel trucks filled the engine everyday. They also had a mechanical issue with their air brakes that was fixed on site, at the incident camp.
He described the crew's typical day as getting up in the camp about 5 a.m., going, to breakfast, then a mass-briefing, division weather condition reports, chores, then off to particular assignments, which might have been anything from pulling hose off the line, rehab, working hot spots, or mop-up operations. For several days they were also assigned to what he called a "spike camp" or smaller, remote camp away from the hustle of the 1200-person incident camp.
"At the Spike Camp, there was only about 100 of us there. It was more remote and rustic and we didn't have the same food service, but we enjoyed our stay. A typical day would usually be about 14 to 16 hours before time to turn in, for the evening.
He did say the crew experienced 'active fire.'
"We saw 20-foot high flames, though we working in the black." The biggest danger however, was probably avoiding hazards from fire-weakened trees, he said. "Snags, that was the real danger.," Menze said.
Northeast Teller Fire Protection District has sent at least two three-person crews to assist with the River Complex wildfires in California, on the Shasta Trinity National Forest. Chief Tyler Lambert reached during a 'rain break' several weeks ago said they also had a wild-land engine, and one of NETCO paramedic had transported a trauma patient to the local ambulance while deployed in Northern California.
Cripple Creek Fire Chief Randall Baldwin recently had a three-person crew return from fighting fire for 11-days on the Flat Head National Forest near the Blackfeet Reservation in Montana. They deployed a ‘Type 6’ wild-land engine and Fire Captain Ryan Lohmeyer, firefighters Dan Battin and Sonny Brown spent 30 plus hours on the road to and from that fire.
"It is a fantastic training opportunity and we know that if we have a fire here, we would see crews from all over the country, like we did during the Black Forest Fire and Waldo Canyon," said Baldwin. 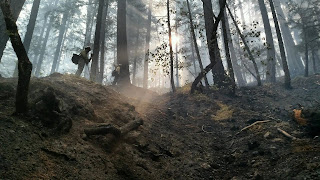 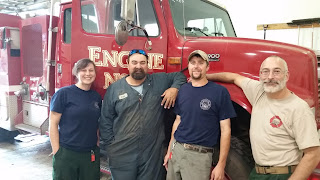 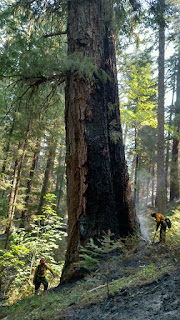 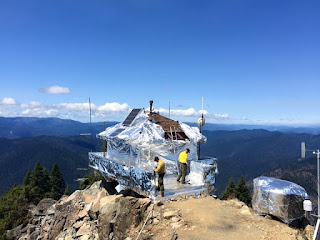 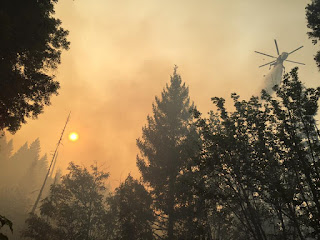 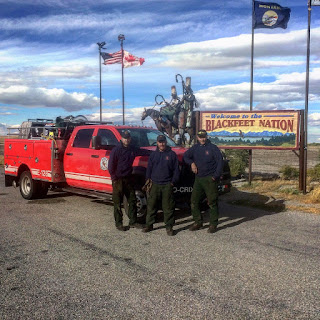 Photo Information:
Photo 1: The view from Spike Camp is enhanced by the smokey sunset.
Photo 2: Early morning mop-up and patrol in the Owl Creek drainage.
Photo 3: Divide Fire developed a problem with fire pump's high-pressure hose and had to go out of service to have it repaired. We ended up at Pro Pacific in Eureka. The owner called a friend over to his shop who was head of fleet maintenance for Six Rivers National Forest. The crew was able to get it fixed and back on the fireline.
Photo 4: Crews might face a whole different set conditions with larger trees and unfamiliar topography.
Photo 5: NETCO firefighters wrapping a lookout tower in the Shasta Trinity National Forest on the River Complex Fire.
Photo 6: Helicopter drop in the rough terrain and smokey conditions.
Photo 7: Cripple Creek Fire Fighters Dan Battin, Ryan Lohmeyer, Sonny Brown near the Blackfeet Nation in Montana.