Key is forgiveness and finding out what really happened 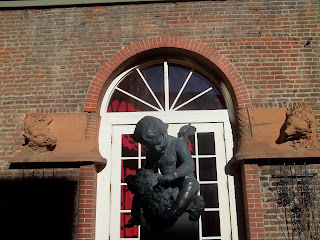 
Generally, I am a peaceful man. But on at least three occasions, Scott Weinmaster has gotten my back up. It involved a key in each case.
I could of beat the guy senseless, if I could have beaten him senseless. However, that would have required me to wait for him to fall asleep, and then strapping him down like the Lilliputian army did in Gulliver's Travels. A task that I was up for. But I assume it takes all the fun out of beating somebody senseless when they are strapped down.
The first case involved the key to my 1974 green Vega. I can't remember what kind of cockamamy story he told me originally to convince me to hand over the key. Chances are it had something to do with a girl. Many stories that started with Scott, and ended in trouble had that common theme.
The only thing I know is, that he said he only need to borrow it for about a half hour, and he would be right back.
Wasn't that about three and half hours ago? Steam is coming out of my ears. And when he finally shows, it looks like the right front tire is flat. I go to change it — and what the heck, the spare is flat too. "I don't know," he says. "You ought to buy some new tires, man."
It took me about 30 years to forgive him, but that was only after I learned what really happened about a year later.
Ordinarily, I am an intelligent man. You would think I would never fall for "let me borrow the key to your car, I will be back in about 30 minutes," again. That did not prove to be the case.
Once again, I loan the key. But hey, this was a big party at the Rico Court House. I personally was having a great time and my defenses were apparently compromised.
Once again, long after the prescribed half hour has come and gone, I am searching for my car and my "so-called friend" when I see red lights down the street, behind what looks like a green 1974 Vega.
"It is lights," I confirm. "And it looks like the the car is halfway hanging over a retainer wall in that little, old lady's yard."
Turns out, it was lights on the Rico Town Police car. The green Vega was hanging over the retaining wall. And we spent the next few hours explaining to Officer Sheperic how we planned to remove the car, repair the damaged wall, and manage to get home to Dolores, without getting into any additional trouble.
It took me about 30 years to forgive him, but that was only after I learned what really happened, about six months later.
Commonly, I am easily-educated man. That is why, when Weinmaster says one day, "Lets go over to Durango," I say "Okay, but you are driving."  We hopped in Granny's Ford Fiesta and made our way over high trail to the big city. Me, thinking all the way over, "I am in safe territory, because I am not driving, and my car is not even here to worry about."
Fort Lewis College happened to be having "freshman orientation" that evening, and somehow, we ended up in the presence of a particularly beautiful young woman with long wavy hair and stunning blue eyes.
As was his custom, Weinmaster was once-again very adept in striking up a conversation with such creatures, and I, once again, was the odd man out. Which wouldn't have been so bad  if that particular night hadn't been about 40 degrees, having no coat, and you guessed it, the absence of a key to get into Granny's Ford Fiesta.
He told told me later, "I couldn't give you the key. You would have left me there." Probably correct.
It took me about 30 years to forgive him, but that was only after I learned what really happened, about three weeks later.
Weinmaster can really get my back up at times. The key is, I feel like I probably should have beat him senseless several times. But it would take him 30 years to forgive me — and then only, when he found out what really happened.