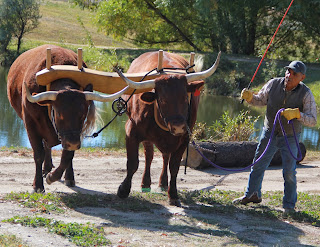 The breed is now extinct in England and were down to just a handful in the United States until about 30 years ago.

"Happy the man who far from schemes of business, like the generations of mankind, works his ancestral acres with oxen of his own breeding, from all usury free." ___ Epodes (c. 29 B.C.)

For more than 2,000 years, it has been been a good idea to raise your own teams of Oxen.
Rollie and Paula Johnson, with the help of their hired hand of the past nine years, Dulces Granados, have been doing just that, since 2006 at Three Eagles Ranch, just over the Douglas County line near Monument. The ranch is one of the few western ranches that raise American Milking Devon Oxen.
"As some of the first cattle in America in 1623 two heifers and a bull from north Devonshire, England were received in the American colonies. In later years, other Devon cattle were imported and contributed to the American Devon which developed as the ideal multipurpose breed. No other cattle could surpass it for draft work (they can walk at six miles an hour); the milk was high in butterfat content, making it excellent for cheese and cream; and the carcass developed fine lean beef on relative poor forage," says literature from the ranch.
Rollie Johnson, CEO for a group of more than 50 radio stations all over the country, showed his prowess at hooking log chokers Tuesday in Monument, as Davy and Dandy skidded logs across the field. The four-year-old team weighed in at about 2,000 pounds each and will continue to grow for three more years.
"Oxen were used extensively to pull wagons of the pioneers along the Mormon, Oregon, California and Santa Fe trails. At one point in the 1850s, an average of 750 wagons left Omaha daily and the majority were pulled oxen. Oxen could eat while walking. You could milk the cows at night and, if one died, you could survive their meat. Once the pioneers arrived at their destination, the oxen were then used as draft animals on the farms and ranches and towns created. An ox can be any breed of cattle but is basically a steer that is more than four years old and has been trained as a draft animal and, ultimately, will be called an ox. If you can trace your family's history in the 1800s to the use of any of the four major trails, then your ancestors' goods most likely arrived by being pulled by oxen," according to a Three Eagles information piece.
The breed is now extinct in England and were down to just a handful in the United States until about 30 years ago. Efforts by the American Livestock Breed Conservancy and others have been able to increase the American herd to about 600 animals, mostly in New England states.
"Three Eagles Ranch began its herd in 2006 when it purchased a cow from Missouri. A bull, nicknamed Jesse James, was purchased from Washington's Birthplace Farm near Williamsburg. The first trained oxen team — Clark and Coolidge — was sold to Bent's Old Fort at La Junta along the Santa Fe Trail and can be viewed at historical presentations at that site. Today's second trained team from Three Eagles — Calvin and Chester — were born in 2008 and are still growing and live the Plains Conservation Center in Aurora, Colo.  A third pair, Ike and Earl, are going to Arizona to be used in an experiment to prepare equipment that can be easily replicated in rural Africa. Three Eagles Ranch has four other teams in training at the ranch — David and Dandridge, Fitzgerald and Ford, Grant and Garfield, George and Grover," says ranch information. 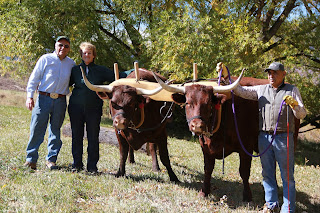 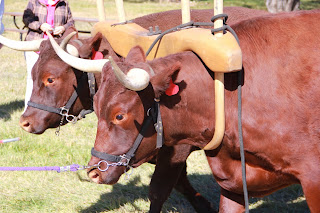 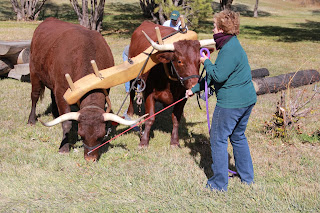 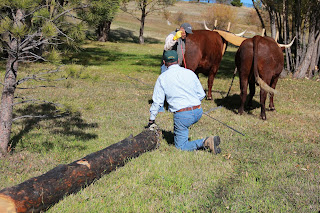 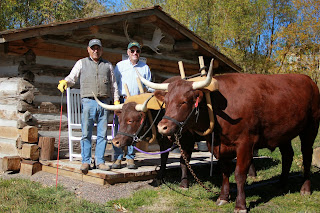 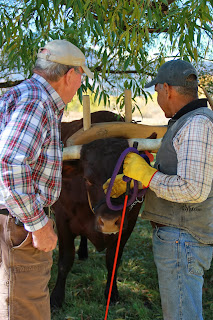 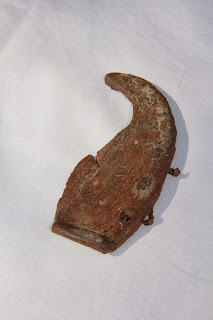