Waved to his wife and headed for a train wreck 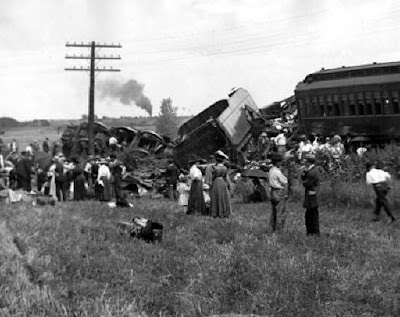 Not far from my house, very near the present-day North entrance to the United States Air Force Academy, once stood the town of Husted. Named after pioneer lumberman and early El Paso County Commissioner Calvin R. Husted, the town was never what you might call a thriving metropolis. But until the late 1950s, when most of its buildings were removed in preparation for the coming academy, it was an important stop on the Sante Fe and Denver & Rio Grande (D. & R.G.) railroads. It also was the location of one of the most horrific train accidents in Colorado history.
“On the D. & R.G. railroad at West Husted was a round house, turn table that employed several engineers, brakeman, and other crew men all year,” wrote Lucille Lavelett in her book “Monument’s Faded Neighbor Communities and its Folklore.”
“The steam engines had power to pull the freight and passenger trains from Colorado Springs to Husted, but not enough power to pull the steep grade to Palmer lake to the “Divide,” therefore extra helper engines and crews of men were kept at Husted. They turned around at the ‘Y’ at Palmer Lake and returned to Husted,” wrote Lavelett.
The Colorado Springs Gazette of August 14, 1909, related the story of the rail accident there over 101 years ago.
“Nine persons are dead, and others are expected to die; between forty and fifty are injured; three engines are in the ditch; two baggage cars, including the contents, are smashed to kindling wood, and several passenger coaches are badly damaged as the result of a head-on collision between east bound passenger train No. 8, and westbound passenger No. 1, on the Denver & Rio Grande, near Husted, thirteen miles north of this city, at 10:25 a. m. today. The wreck was due to a misunderstanding of orders, it is said.”
Report from papers all over the nation carried the dispatches.
As No. 8 drew into Husted about forty miles an hour, the crew of the engine saw a light engine standing on the switch north of the station.
“Mistaking the engine for the second section of No. 1, the crew did not stop, and went through the station as fast as the two engines could draw the thirteen heavily laden coaches. As soon as the train got out of the station, the engineer of the first engine of No. 8 saw another train coming slowly down the incline. He slammed on the air brakes, and the emergency brakes, and then shouted to the other members of the two crews to jump. Before they had time to jump, No. 3 had rammed No. 1 so hard that all three engines lay in the ditch,’ according to the Nebraska State Journal at the time.
“Fireman J. A. GOSSAGE, of train No. 8, was killed as he was firing his engine, and never knew what struck him. The members of the other crew escaped serious injury by jumping.”
The smoker, attached to train No. 8, was the car in which the people were killed. All those badly injured were in the same car.
Other reports said that J.A. or Jack Gossage, the fireman on the helper engine who lived at Husted and had just waved to his wife as the train passed his home was trapped between the engine and the tender when the collision occurred.
Jack Gossage's wife continued to work for the railroad for many years afterward as a cook for crews in Husted, and the Gossage name eventually became quite famous for other reasons in Colorado Springs. Jack Gossage is grandfather to Colorado Springs standout and major league baseball hall of famer Rick “Goose” Gossage.
“The wreck occurred just east of the east switch at Husted. The impact of the trains was terrific and the locomotives and the baggage and smoking cars of both trains were badly damaged,” reported papers at the time.
“The shrieks of the wounded were pitiful and those who were not injured among the passengers immediately started the work of rescue. It was impossible to accurately determine the number of dead, but first reports indicated that eight had been killed.”
Later reports blamed the wreck on one of the train crews negligence.
An August 20, 1909, account in Carbon County, Utah, related the following:
“The coroner's jury which investigated the head on collision on the Denver & Rio Grande railroad at Husted, Colo, Saturday morning, when ten persons were killed and three score injured returned its verdict on Tuesday. The verdict finds that the wreck was due to criminal negligence on the part of the train crew, composed of Engineers Lezsig, and Hollingsworth, Fireman Wright, Conductor Dalton and Brakeman McElhern. The verdict also declares that the evidence shows that a defective system for issuing train orders was employed by the railroad at the time of the wreck. An order was sent to Denver to arrest the members of the train crew.”
Wilbur F. Fulker and his brother Iven were passengers on the southbound train out of Monument involved in the collision. Wilbur took a series of photographs with a new camera using glass plates that famously chronicled the accident. Wilbur’s son, also Wilbur, is the tuba-playing inspiration for the Colorado Spring’s landmark “Uncle Wilber’s Fountain” at Acacia Park and longtime teacher and administrator at the Colorado Deaf and Blind.
###
Posted by ___ Restless Native at 8:49 PM