Vanished, without a trace 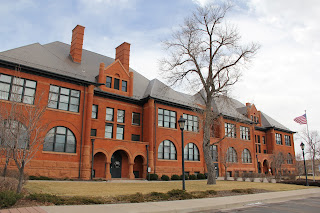 In late September of 1917, Colorado Springs was, for the most part a growing, peaceful, tourist destination bolstered by years of economic vitality related to gold mining in the Cripple Creek mining district and ore processing in Old Colorado City. While some folks were concerned about increasing incidents of influenza, the war in Europe, and other such worldly worries – they became really frightened when a 10-year-old girl vanished, without a trace on September 18, 1917.
“Nellie Ferguson, 10-year-old child, has been reported missing by her parents. She was last seen at the Lowell school yesterday about 3:45 p.m., when she stayed after school and assisted one of the teachers,” according to the Gazette on Sept. 19.
More than 150 men and boys searched all day for the girl in nearly every part of the city, and police officers, opening a full-scale investigation, still, they could not locate Nellie Ferguson, daughter of Mr. and Mrs. Fred Ferguson of 15 West Rio Grande Street.
By September 21, the city was nearly in a panic. A systematic search performed by volunteers from Colorado College, the high School and Lowell School, under the direction of D.G. Johnson, the Commissioner of Public Safety, scoured the surrounding area within, and 5 miles beyond, city limits. Still, no sign of Nellie.
Rewards from most every group and numerous individuals sprang forth: $25 from the Gazette, Teachers, the PTA and the principal at Lowell School contributed. Students from Lowell School raised $17, which was a substantial sum for school children of that time. Later, the city (by decree of the city council) threw in $100 to reward fund. Postcards by the hundreds, with little Nellie Ferguson’s photo, were mailed all over the state.
“A Mr. and Mrs. William Hamman came under suspicion; they were said to be members of the Pillar of Fire religious sect and had roomed at the Ferguson’s for a while. After moving to another house, the Hammans were said to have become very friendly with Nellie.” according to a 1962 paper by Carl Mathews for the Denver Westerners’ Roundup. Mathews served as superintendent of the Bureau of Identification in the Colorado Springs Police Department for 32 years and retired in 1952.
The Pillar of Fire religious sect, founded by Alma Birdwell White, was later connected with Ku Klux Klan of the 1920s in Colorado, though they have since renounced that connection, calling it a mistake.
“On Sept. 20th, they were located in Fountain. That evening, Acting Chief Hugh Harper with officers of the Police Department, and Sheriff Weir, accompanied by a representative of the Gazette, went there and, after two hours of cross examination, the Hammans were permitted to remain in Fountain. However, they were under police surveillance, which was continued after they went to Pueblo. On the 28th, at the instigation of Fred Ferguson, the father of the girl, a warrant was issued and they were arrested and returned. On October 2nd they were to be arraigned on a charge of ‘Contributing to Juvenile Delinquency,’ but I was unable to find any further mention of that angle,” wrote Mathews in 1962.
By late October, a Grand Jury conducting an investigation questioned many witnesses including Mrs. Ferguson and neighbors living near the Ferguson home, but came up with zip, nothing, zilch, nada.
By mid November, the girl’s father had shifted his own focus to Denver thinking that perhaps the girl had been taken by Gypsies, and the Denver Police Department was reportedly working on several clues. Unfortunately, those efforts turned up nothing. Mr. and Mrs. Fred Ferguson went to their grave without any real idea what happened to their young daughter. Little Nellie Ferguson was never again seen after completing her helpful chores at Lowell School on the afternoon of September 18, 1917.
###
Posted by ___ Restless Native at 9:37 PM