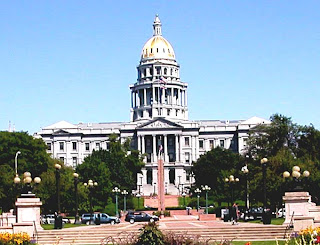 When I worked in downtown Denver, everyday driving into work, I marveled at the golden dome of the capitol when I turn east onto Colfax Avenue from I-25. It is certainly not the highest building in the Denver skyline, but the shiny edifice off to the right stands out as unique, substantive, and respectable. Many mornings, the sun reflecting off the gilded hemisphere is occasion enough for sunglasses.
Gold is an impressive and appropriate material to cover the top of the state’s top government building. The precious metal helped build and pay for much of the ‘Centennial State’s’ growth and expansion.
It called out to the first Argonauts of 1859 and inspired their push for “Pikes Peak or Bust.” Later, the yellow metal made possible ‘the greatest gold camp in the world’ at Cripple Creek and Victor. Money earned in that district, transformed Colorado Springs into a world class tourist destination and paid for city, county and federal buildings all over town. Huge lumps were pulled from Clear Creek and the central mountains near Breckenridge. If California hadn’t beaten us to it by 10 years, we probably would be known as the Golden State.
But the dome wasn’t always golden. In fact the whole building had a bit of a troubled history. Henry Brown, (the same Brown who built another Denver landmark, the Brown Palace Hotel) donated the land for the building a full eight years before statehood in 1868, but because no fundraising was occurring at the time Colorado became a state, he filed a law suit, and put up a wooden fence around the property. The suit went all the way to the United States Supreme Court where Brown’s revocation of the property was rejected. Even so, builders didn’t turn a shovel on the new structure until 1886. And it was slow going for years afterward.
The first contractor encountered cost overruns early on and was replaced. The Detroit architect who designed the building, Elijah Meyers, was fired after two years on the job. The second architect, Pete Gumry, was killed in an explosion of another building. Striking quarry workers slowed construction. The third architect, James Murdoch, resigned after three years. Local architect, F.E. Edbrooke, (who had designed many local buildings including the Brown Palace) finally finished the job. It was Edbrooke who suggested that the dome be gilded with real Colorado gold. But that part of the project didn’t happen until 1908.
The original dome’s copper sheathing turned a dull greenish hue shortly after completion. A donation of 200 ounces of real Colorado gold, produced by the Colorado Mining Association at the urging of San Juan road-builder, newspaper founder, and general all-purpose pioneer, Otto Mears -- finished off the building. Of course, the price of gold wasn’t $1050 an ounce at that time.
It was re-gilded in 1948, again in1980 and once more in 1991.
“Atop the dome is a glass globe four feet in diameter that surrounds a beacon-like light bulb. Originally it was thought that a statue, of the "most beautiful woman in Colorado" was the most appropriate way to adorn the dome. One board member suggested his own daughter and with the female members of the legislature voting for themselves, the board did the politically correct thing and voted down the proposition,” according to virtual tour information at the state’s web site.
In the summer of 2009, Gov. Bill Ritter announced that plans to repair the golden dome were on hold, but the work was completed a few years later. The cast iron that made up the bulk of the dome was rusting and crumbling.
“But the state officials say the public is not in any danger. Visitors have not been allowed on the walkway around the dome since a 10-pound piece of cast iron fell off in 2007,” said a June 30, 2009 article by Claire Trageser in the Denver Post. Its shiny top eventually brightened the Denver skyline.
In the meantime, the dome still garners iconic status in the minds of Colorado residents as evidenced in former Sport Illustrated columnist and ESPN personality Rick Reilly’s ‘licking of the dome’. Reilly, a Colorado native, made good on a promise offered up on the Mike Rosen show in April,  of 2009, that if the Rockies made the playoffs, he would “tongue-bathe the capitol dome.”
###
Posted by ___ Restless Native at 8:39 PM