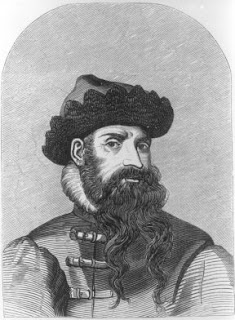 Printing is one of those things you just take for granted. Yes, there are others — like being careful who you borrow money from, and waiting to adopt cutting edge technology instead of jumping on the bleeding-edge.
Johannes Gensfleisch zur Laden zum Gutenberg is credited with invention of printing in the 1440s.
Drawing on earlier vocations of metalwork, gem-cutting and part-time teaching, he combined operations and equipment such as a wine press, wood engraving, brass molds and matrices to create lead type. He pulled these multiple processes together enabling completion of the first print job in 1455, in Mainz, Germany.
Delivery of that job comprised 200 copies of a 42-line Bible (number of lines per page) but because of debt incurred to get to that point, ownership of his press was transferred very shortly afterward to the man who loaned him the money.
Johann Fust, a lawyer and businessman, who had financed the last five years of Gutenberg’s work to the tune of two separate loans of 800 guilders each, won a court judgment against him. Fust then forced Gutenberg out of the business and engaged his foreman Peter Schoeffer as his partner. The partners went on to produce fine printing and created a regional recognition for Mainz as the cradle of the printing industry.
“Documented evidence of Johannes Gutenberg (1406-1468) is scant and little is known of his equipment and methods of printing. But it may be assumed that he employed some sort of compartmented trays in which to store his type,” says Fred Williams, publisher of Type & Press in 1992 article. “Possibly the boxes were arranged alphabetically, but undoubtedly their lay underwent modification as some letters were used more than others, requiring larger boxes to hold more characters. These oft-used letters were placed nearer to the type-plucking hand.”
His type was cast from lead, antimony and tin and reportedly had 290 different symbols. Among the substances he used for ink included a concoction made from soot and boiled linseed oil.
It is not real clear what happen to Gutenberg after losing his press to satisfy his debt but records indicate that the archbishop of Mainz in 1465, provided him a pension involving food and clothing and tax exempt status until his death three years later.