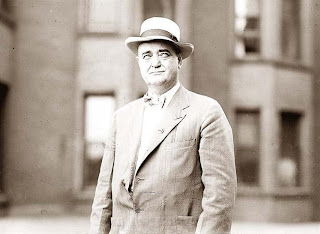 Every dog, we are told, has his day, unless there are more dogs than days

Perhaps it is not really that far from gunslinger, Indian fighter, and frontier lawman in the hardscrabble cowtowns and mining outposts of the old west -- to newspaper sports editor, Broadway cult hero, and friend of the president in the “Big Apple.” But as far as I know, it takes a unique sort to travel such a road.
William Barclay Masterson, 67, or “Bat” as he was commonly known, was found slumped over his typewriter one late October Tuesday morning in 1921, in his office at the Morning Telegraph.
It was the end of the trail for Masterson who had spent the last 18 years (three days a week) writing his column “Masterson’s Views on Timely Topics.” The heart attack that finished him, gave him just enough time to finish his last dispatch. The following last words were found still in the typewriter carriage.
“There are those who argue that everything breaks even in this old dump of a world of ours. I suppose these ginks who argue that way hold that because the rich man gets ice in the summer and the poor man gets it in the winter, things are breaking even for both. Maybe so, but I'll swear I can't see it that way."
“His body was taken to Campbells, the famous New York funeral parlor where a simple service was held in their chapel with burial following in famous Woodlawn Cemetery in the Bronx. His large upright marker is emblazoned with the epitaph: "Loved by Everyone," according to a biography by Donald Greyfield.
Having served as buffalo hunter in Kansas, Indian fighter in Adobe Wall, Texas, lawman in Dodge City, Kansas, Trinadad, Colorado, and Tombstone, Arizonia (with the likes of his good friend Wyatt Earp and Doc Holliday) hired gun, and security for Judge Roy Bean in Langtree, Texas, principal in the"Royal Gorge" war between competing railroads in Colorado, federal marshal appointed by the president in New York, fight promoter, professional gambler, faro dealer, saloon owner in Creede, Colorado, and theater owner in Denver, Colorado, as well as inspiration for movies, books, pulp magazines and Broadway plays, his big old heart finally gave out.
###
Posted by ___ Restless Native at 1:55 PM