Hayman Fire and the newspaper 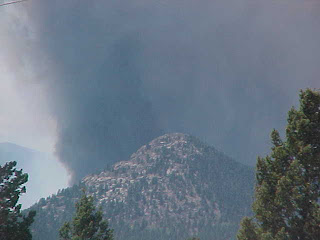 In sky above the ridges surrounding us, air was filled with smoke and an ominous bright pink in color

For three intense weeks in June of 2002, the Hayman fire, Colorado’s largest wildland fire in recorded history, ravaged our circulation area. Hayman burned over 137,000 acres of prime forest in five counties, destroyed at least 132 homes and reduced over 800 other structures to ash piles.
The Ute Pass Courier and The Gold Rush were paid weekly news products servicing the U.S. Highway 24 corridor with circulations of about 4,000 and 1,200 respectively. They were produced in Woodland Park, Colo., and delivered by U.S. Mail on Wednesday. A total market coverage shopper was also put together at the same location and mailed, bulk rate, to every mail box in Teller County. I was the publisher at the time of the fire of these three products and managed operations and about 20 full and part-time employees. We printed at a centralized plant 50 miles away in Castle Rock, Colo.
Highway 24 snakes its way up through Ute Pass and the communities of Manitou Springs, Cascade, Green Mountain Falls, Chipita Park, Woodland Park and then meanders over the ridge at Divide and drops down into Florissant.
Eventually it finds its way to Lake George. The fire started a few miles northwest of Lake George and then traveled, mostly along the South Platte River watershed, torching, scorching and threatening subdivisions and our readers homes and land.
For weekly newspapers such as The Courier and The Gold Rush, covering breaking national spot news on deadline in the same environment with radio, TV and daily newspapers was an awesome challenge. With four full and part-time news employees covering six or seven communities 60 or 70 miles apart, it was tough getting the papers out every week. Now try to beat outfits that send teams (larger than our whole staff, publisher and paper carriers included) out for up-to-the-minute reports.
For members of our staff at the newspaper, the weeks of stress related to intense long-term sustained coverage of a big story was compounded by whether or not their house, or place of employment, or both might burn. And all their friends and neighbors were in a similar predicament.
Tuesday, June 18, tested our collective nerves the most, I believe. Woodland Park rests in a bowl. In the sky above the ridges surrounding us, the air was filled with smoke and was an ominous bright pink in color. City officials with bull horns were driving up and down the streets warning residents that they were on standby evacuation alert.
Reports vary on how close we were to being evacuated that night in Woodland Park. Some officials say 15 minutes was all that separated us from the “trigger points” on evacuation. At the newspaper office, we went as far as pulling our main servers and made plans to put the next week’s papers out in staffers’ homes and/or the printing plant in Castle Rock.
We were a Macintosh-based operation and pulling servers meant backing up everything by burning CDs and grabbing two G3 blue boxes. Theoretically, we could have put PDF pages together on any Mac and e-mailed them to the plant to be imaged through the raster image processor — theoretically. Fortunately we didn’t have to test the theory.
If Highway 24 was closed, we were to drop mail deliveries at the U.S. Postal Service’s Fountain distribution center at the south edge of Colorado Springs and carriers would originate from there instead of two post offices in Woodland Park and one in Cripple Creek.
Tuesday night, the fire burned up to the Manitou Experimental Forest about seven miles from town and then fell down and went to sleep. Our offices and other businesses and residences in Woodland Park were removed from standby evacuation warnings two days later.
Our fire coverage ran through much of the main news sections in the coming weeks but we also tried to dedicate four broadsheet pages in the center of the paper as an information guide for relief efforts.
As that was updated, and as needs changed, the pages became more of a forum for people in the community to give their take on what was happening.
In addition to our own staff coverage, we felt it was important to offer our readers a mix of submitted material as well. Some of the voices brought forward in our pages included a diary of the first weeks of the fire as seen through eyes of local volunteer firefighter, exceptional photos from those documenting the loss of their homes, and excellent accounts of animal rescue efforts from those involved.
For three weeks during the height of the coverage, we overran our primary product, The Ute Pass Courier, by about 500 papers. About half of the overrun was distributed free at Red Cross and Salvation Army shelters in Woodland Park, Divide and Lake George. The rest of the additional papers sold on the newsstands and to locals who continued to wander into our office for months after the fire, saying they missed the paper during the conflagration.
For years afterward, we continued covering the fire in various aspects. The effects on the tourist-reliant business community, the government responses, the cleanup, the flooding, and all the evaluation and Monday morning quarterbacking were continuous elements of our weekly products. Personally, I know I will always remember how ragged we felt, even months after the intense initial three weeks of baptism by fire. Today, talking with survivors of Hayman and hearing about their experiences still brings back images in my mind of that weird pink, smoky glow on ridges above Woodland Park.
###
Posted by ___ Restless Native at 8:18 PM