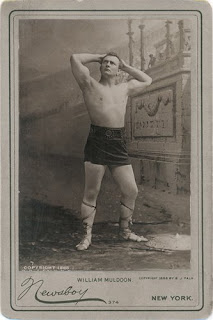 "All I know about training I learned from him," Gene  Tunney said.

World champion wrestler, boxing trainer and strongman William Muldoon had limited experience with Colorado, but that did not stop him from being connected with the place.
"Muldoon wrestled in August 1881 at Denver in old Turner Hall at what is now Market and 20th. He also appeared in Central City and Georgetown in September of that year," notes a reader to a previous post.
Solid Man was a slang term used to describe a plain-thinking person from the country or overseas who doesn't adapt to city mores, the reader says.
Muldoon was a lot like many folks from Colorado in the 1870s and ‘80s -- hard-fighting, rough-and-tumble, confused about their origin, and perhaps prone to ‘improve’ their particular stories.
It was for Bill Muldoon, in fact, they chose to name a seven-foot-stone man, a "prehistoric human body," discovered near Beulah in 1877, according to many accounts.
Though Bill Muldoon’s nickname ‘the Solid Man’ probably originated from a song written by New York theater writer Edward Harrigan and first performed in March of 1874 in Manhattan.
The discovery was billed as the ‘missing link’ between apes and man and hucksters, including Soapy Smith, charged those interested 10 cents each to take a look. The 7-and -half-foot stone man was thought to be the "missing link" between apes and humans.
"There can be no question about the genuineness of this piece of statuary," said the Denver Daily Times at the time.
It was later revealed that George Hull, perpetrator of a previous hoax featuring the Cardiff Giant, had spent three years fashioning his second "petrified man," using mortar, rock dust, clay, plaster, ground bones, blood, and meat. He kiln-fired the figure for many days and then buried it.
A few months later, as the celebration of Colorado's year-old statehood approached, the statue was "discovered" by William Conant, who had once worked for the legendary showman P.T. Barnum. News of the find quickly spread to Denver and eventually New York. Displayed in New York, the "body" attracted large crowds until a business associate of Hull's revealed the hoax to the New York Tribune.
Harrigan’s lyrics for “The Solid Man,” go like this:

I am a man of great influence
And I'm educated to a high degree
I came when small from Donegal
On the Daniel Webster across the sea
In the 14th Ward [(or) Jersey City] I was situated
In a tenement with my brother Dan
By perseverance I elevated
And I rose to the front like a solid man.

CHORUS:
Then come with me and I'll treat you decent
I will get you drunk and I'll fill your can
And on the street every friend I meet
Says there goes Muldoon; he's a solid man.

To every party and every raffle
I always go, an invited guest
As conspicuous as General Grant, me boys
I wear a rosebud all on my breast
I'm called upon to address the meeting
Without regard to clique or clan
I show the constitution with elocution
Because you see, I'm a solid man.

Different accounts also suggest that Civil War hero and outspoken newspaper owner, David F. Day, (himself from New York) named his legendary Ouray newspaper (which later moved to Durango) after either the wrestler, the statue, the song, or all of them combined.
Bill Muldoon, grew up in Belfast, New York, and became a soldier, serving in the Civil War (though this is disputed by American National Biography, which says it was actually his older brother that served in the Sixth Calvary) and then for the French army in the Franco-Prussian War.
It was there he was introduced to Greco-Roman wrestling. By 1880 he was the champion of the world, having never lost a match and defeating opponents all over the world. Also by that time, he had become a New York City Police Officer, rising to detective when he resigned in 1882.
Famous sporting writer, Al Spink, had this to say about him in the Reno Evening Gazette, Saturday, March 8, 1919.
“He became famous in a few weeks by throwing all opponents easily in the police tournaments held in the metropolis.
Sporting writers called him “the noblest Roman of them all," and he was, perhaps, the finest-formed man ever seen in an American arena.
He was so handsome that when Modjeska, the Russian actress, laid eyes-on him she fell in love with him and immediately employed him to take the part of Charles the Wrestler in the play of "As You Like It," in which she was then appearing.”
Spink goes on to tell tell of his own disenchantment with the sport of wrestling as it related to Muldoon.
“Of the entire company of great wrestlers at that time there was not one to compare with Muldoon in splendid looks, in wonderful stature and magnificent muscle and strength.
Bauer came nearest to him, but it was only in height that Bauer possessed an advantage. I recall a bout in which the two were the principals, and I thought they were doing their level best, but happening behind the scenes between falls I heard Bauer say to Muldoon:
‘If you want me to go on, Mul, you’ll have to throw me lighter than you did then. If you don’t, I’ll never go on with you again.’
Then, for the first time, I discovered that the entire game of wrestling was rotten. Later, I learned more about it, but this was my first awakening.
Of all the wrestlers in the world I had looked on as being worthy of esteem and confidence, Muldoon appeared in my eyes the worthiest and squarest of the lot. And now even that dream was shattered.”
Muldoon in later years went on to form the Olympia Institute that catered to celebrities and politicians. He also trained a number of professional boxers including Gene Tunney.
William Barclay “Bat” Masterson, himself with an extensive Colorado history, befriended Bill Muldoon and after waging an aggressive campaign in his New York Morning Telegraph columns against two successive New York boxing commission chairmen, was somewhat responsible for his appointment. The campaign had the desired effect, prompting the ousting of first one and then another when Bat was unsatisfied with the replacement. The governor of New York, Theodore Roosevelt, finally appointed William Muldoon, one of Bat's oldest and closest friends, as chairman in 1921.
Muldoon died in 1931 of prostrate cancer.
At the time of his death, The New York Times obit quoted retired boxing champion Gene Tunney, “All I know about training I learned from him…. His patience, intellectual courage and wisdom were inspirational.”
###
Posted by ___ Restless Native at 10:24 PM

I did not know William Muldoon was the man behind the name. Very interesting, and makes sense.

I am related to Jefferson Randolph "Soapy" Smith and wanted to let you know that although many authors have linked Soapy with the "Solid Muldoon," this is incorrect. Soapy had his own petrified man, named "McGinty" which was a real human being intentionally petrified. It was "found" in Creede, Colorado in 1892. He then took it to Denver and placed it on display, where it was photographed. I have a copy of that photograph and it will be included, along with all the details, in my biography on Soapy coming out in the spring of 2009.

I do have some information on "McGinty" on the family website about Soapy Smith. I look forward to hearing from you.

Muldoon wrestled in August 1881 at Denver in old Turner Hall at what is now Market and 20th. He also appeared in Central City and Georgetown in September of that year.

Solid Man was a slang term used to describe a plain-thinking person from the country or overseas who doesn't adapt to city mores.

My name is Traci Muldoon, the third great niece of William Muldoon. I am Robert's grand daughter. Robert is the nephew mentioned in the newspaper articles regarding who The Solid Man gave his inheritance to. I just recently found out about the significance of my great, great, great uncle William! And frankly, I am blown away. I have recently been contacted by reporters in Belfast to do a feature story on my relation to him and I was doing some research tonight and came across your article.

If you know anything about William's connection with the military, I'd really appreciate it. I am currently trying to solve that mystery. I added the follow up comments on this post I am writing to my personal email so I should get the notification if you do reply so we can connect.

Hope to hear back from you.