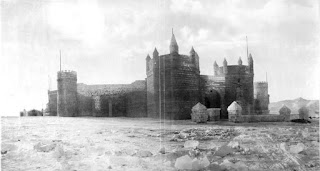 This 1896 W.H. Jackson photo of the ice palace in Leadville, Colorado, was not the center of government, but the city did finally get the nod as county seat for Lake County, in 1879.

By Rob Carrigan, robcarrigan1@gmail.com
In the early days of Colorado, it seems, county seats were a little more 'nomadic.' But things have settled down a bit, with no seat changes since 1941, when Dolores County seat transferred from Rico to Dove Creek.
"Becoming the county seat brought a town prestige and government jobs, but it was a contested honor that sometimes led to squabbles, burned courthouses, and even murder,"notes historians and map creators Thomas Noel, Paul Mahoney, and Richard Stevens, in their "Historical Atlas of Colorado."
Newcomer towns often tried, and sometimes successfully,  to take the county seat from towns or small cities on the wane.
Other forces conspired, as well. Railroads on occasion determined the staying power of some seats. For example, the Denver and Rio Grande (D &RG) bypassed three existing county seats — Colorado City, Howardsville, and Parrott City — in favor of towns that it founded which later became county seats: Colorado Springs, Silverton and Durango.
In Weld County, the location of the county seat changed a record six times. "Railroads gave Evans, then Greeley, preeminence in Weld County, where Latham earlier had captured the county seat because of a stage stop," according to the atlas.
"In Conejos County the seat was moved to Conejos because floods plagued Guadalupe. Higher ground was also the reason why Larimer County transplanted its offices from La Porte to Fort Collins. When James Frank Gardener, the founder of Frankstown, moved four miles south to California Ranch, he took Douglas County records with him. There they stayed until the county seat relocated at the rail town of Castle Rock."
Mining communities that faded when the treasure gave out, were often moved as well. "Oro City, briefly booming county seat of several thousand residents, was nearly a ghost town by 1866, when Dayton took the title. When Dayton declined two years later, the county government moved to Granite. A decade later, fabulous silver strikes made an instant city of Leadville, which almost overnight, became the second largest city in Colorado and acquired the Lake County government for good. Granite consoled itself by becoming the county seat of newly formed  Chaffee County, only to lose the honor to Buena Vista and finally to Salida," says Noel, Mahoney, and Stevens.
"Idaho Springs lost the Clear Creek seat to silver-rich Georgetown in 1867. Two one-time county seats of Park County, Tarryall and Laurette (renamed Buckskin Joe in 1865,) became ghost towns, while FairPlay survived with the help of county jobs."
Hayden served as the first Routt County seat, then the boomtown of Hahns Peak, though both Craig and Steamboat tried unsuccessfully to wrestle it away. In 1911, Moffat County was split off with Craig as county seat, and that allowed Steamboat Springs to claim the honor in Routt. The mining town of Carbonate was the first county seat of Garfield, but eventually yielded to Glenwood Springs, when it was found out that mines were salted, and population drifted away.
But the most violent takeover occurred between Grand Lake and Hot Sulfur Springs in Grand County when a July 4, 1883, shoot-out culminated that squabble, and ended the lives of four men.
"Most ghoustly of all the former county seats is San Miguel in Costilla County. Even its exact location is a mystery," says Noel, Mahoney, and Stevens. 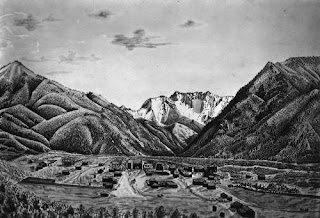