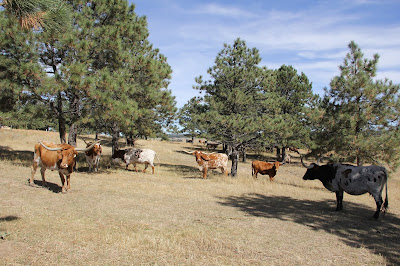 “That sensation of a void within which never left us, that irrational longing to hark back to the past or else to speed up the march of time, and those keen shafts of memory that stung like fire.”
― Albert Camus


Diphtheria epidemic broke out in January of 1880

A fine spring of good soft water flowed through a beautiful meadow in 1869.  Gwillim R. Gwillim, a native Welshman from North South Wales, decided to make it home — for he and his wife and young son.

West Cherry Creek, about five miles east of Monument, is where Richard Gwillim,  his 22-year-old trailing brother found him after disembarking from the train in Greenland in 1871, and young Richard decided to build a life after after arriving in New York by a steamer from Inman line. Farming with his brother, for several years, Richard decided to stay on and bought 320 acres adjoining from the government to the east. He named the spot Bryn Mawr.

For the last nearly 20 years, it has been a local Longhorn operation out at Cherry Springs Ranch (with other grazing ground out in Ellicott) on the former site of Gwillimville. Founded in 1869 by Gwillim R. Gwillim, originally from North South Wales, and six miles east of Monument on Highway 105.

"The cabin and hay shed in the bottom of the pasture dates back to the time of the town," noted Stan Searle in tour during a Chamber event several years ago.

Gwillimville was never incorporated. In its heyday, a cheese factory, creamery, store, blacksmith shop, several saloons, a post office, school, church and worker's quarters sprang from the earth around Cherry Springs and the source of Cherry Creek. The Gwillimville School was eventually moved to Monument, becoming Sunday school for the Presbyterian Church and in the 1980s, the former Tri-Lakes Chamber of Commerce building on Highway 105 in Monument.

In January of 1880, a Diphtheria epidemic broke out affecting brother of the founder's family Richard Gwillim's two daughters, according to Monument historian Lucille Lavelett.

"The family had four little girls," wrote Lavelett. "And the two older ones were stricken. Dr. Bonnett of Monument was summoned but he did not seem to know how to treat the disease, so Mr. Gwillim sent word to Dr. Solly of Colorado Springs, who made several trips to Monument by train, where Mr. Gwillim met him and took him to see the two sick little girls."
"Of course, there was no antitoxin for battling the disease at that time. A few days later, Dr. Buchtel of Denver was summoned. He also came by train to Monument, where Mr. Gwillim drove a team of horses to the station to meet him and took him to the farm." According to Lavelett, it was expensive healthcare for the time.

"In spite of all efforts, the two little girls passed away within a few days of each other. These girls are buried in the Spring Valley Cemetery. The day the second girl died, Mrs. Gwillim gave birth to a baby boy." wrote Lucile Lavelett in her Monument's Faded Neighboring Communities.

"A very strange and sad coincidence happened that two children in every family in the neighborhood died of Diphtheria during that epidemic."

Misfortune plagued the family again in 1895, when Richard Gwillim's home burned, pretty much spelling the end of Gwillimville. Although the house was rebuilt, the Gwillims never returned, eventually moving to Colorado Springs and much later Richard served as El Paso County Assessor from 1913 to 1915.

Stan Searle's career in the media business was not confined to Longhorns however and had fingers reaching out in several directions. Locally, he was the founder and manager of Tri-Lakes Cable, which was sold to Adelphia in 2000, (later becoming part of Comcast) and managed other trade magazines related to cable and other business.

Named among the top 100 Pioneers of the cable industry, Stan's heart however, was in the cattle business. Suggesting that some of his inspiration comes from legendary trail founder Charles Goodnight, Stan co-founded International Texas Longhorn Association and is a recipient of their prestigious "Charles Goodnight Award. The Goodnight-Loving Trail beginning with the "Gather" in Texas after the Civil War, goes through Monument, on into Denver.

With much fanfare, the Tri-Lakes Chamber of Commerce moved into the Highway 105 location in 1985, but the building itself has quite a storied history. It's been a bit transient.

According to a letter dated March 15, 1985, from long-time Monument historian Lucille Lavelett, the building has been bopping around Monument since perhaps as early as 1869.

"The C.E. (Christian Education) Building was once a one-room Gwillimville School. Gwillimville was once a small, thriving community five miles east of Monument on Highway 105. It was founded by Gwillim R. Gwillim in 1869."

"During a period of a few years, a dozen or more families had come from Wales and several from England, and settled in the community. Church services were held in the one-room Gwillimville School until the Gwillimville Church was built in 1893. This Church was built on the northwest corner of (Highway) 105 and Highway 83," wrote Lavelett.

"On Aug. 6, 1919, Monument School consolidated with three smaller districts which were Pring, three miles south of Monument, Husted, six miles south (Husted is now part of the United States Air Force Academy), and Stout, which was east of Husted. The following year, Gwillimville joined the new district (1920)," she wrote.

"It was in the late 1920s or early 1930s, Rev. R.J. Hassted, minister of the Presbyterian Church, and Earl Thompson moved the little white school into Monument and put it south of the Presbyterian Church to be used as a Sunday School and community services. To help the church, the Monument Homemakers Club in 1938, and 1939, paid for having ceiling and walls re-plastered and painted, built a new flue in the west end, bought a large coal circulator heater to heat the building and put linoleum in the kitchen area. The east end had a cook stove, sink and cupboards. Cook stove did not give enough heat to warm the building, so the new flue was built," Lavelett said.

"In the late 1940s, the church built the new kitchen and Sunday School room on the north side of the building. Also a rest room. The town, at that time, had natural gas, so a gas heater was installed," she said.

At the time of the 1985 move to its present location, Lavelett noted that this was third move for the old Gwillimville School.

"When it was built, its home was about one and a half miles north of (Highway) 105 where the children had to walk through a cattle pasture. Children were afraid of the cattle, so it was move close to 105. Moved then to Monument, and in 1985 to home of the Chamber of Commerce," according to historian Lavelett.

Then County Commissioner Frank Klotz and Chamber President Sandy Smith turned a spade-full of dirt in honor of the new building in February, and actual move took place in April of that year, reported the forerunner of the Tribune at the time. The chamber had been organized nine years prior to spearhead efforts to attract business and industry to the Tri-Lakes area.

Tri-Lakes Chamber of Commerce moved to what was once the Monument Town Hall at 166 Second Street in Monument, in February, 2015,  to a building which also recently served as Tri-Lakes Monument Fire Protection District's administration building. 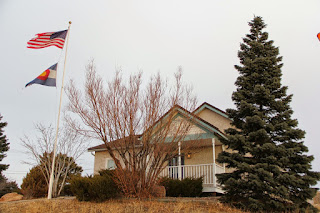 1. Longhorns at Searle's Cherry Springs Ranch near the former site of Gwillimville.

2.  Building was once a one-room Gwillimville School in an earlier life.