Sadness and music lingers in the mountain air 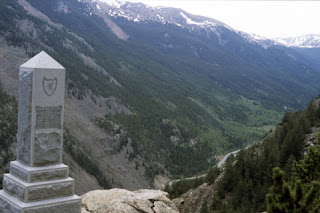 “It was a hurting tune, resigned, a cry of heartache for all in the world that fell apart. As ash rose black against the brilliant sky, Fire's fiddle cried out for the dead, and for the living who stay behind to say goodbye.”
― Kristin Cashore, Fire

“There is nothing more to be said or to be done tonight, so hand me over my violin and let us try to forget for half an hour the miserable weather and the still more miserable ways of our fellowmen.”
― Arthur Conan Doyle, The Five Orange Pips

Haunting strains of the violin rise above the valley

By most accounts, a haunting tune hung in the air above mining camp — the tune where melancholy collides with specificity. The characteristics of the music (in argument) combined with details, memories, and images ... related to one’s life or other emotional triggers.
The perception of sad music we know includes other elements beyond any lyrics, or the music by itself.

"High above the mining town of Silver Plume, a rich vein of ore was discovered in the late 1860s by Clifford Griffin," wrote Colorado historian Kenneth Jessen.

This young Englishman was one of the first miners to come to the Silver Plume area. Little was known about him except that his fiancée had been found dead on the eve of their wedding.

Griffin came to the Rocky Mountains to enter the mining business and to forget his sad past."

The young Englishman soon became the wealthiest mine owner in the area. Nothing, however, caused him to forget his fiancée’s untimely death, and he withdrew socially from the other miners and their families.

On the side of the steep mountain near his mine, Griffin constructed a simple cabin. His sole companion was his violin, and after the end of a day’s work, he would stand at the front of his cabin and play.

The sad music would drift down more than a thousand vertical feet into Silver Plume. Miners and their families would come outside to look up to the lonely musician standing by his cabin. Sometimes one of the miners would request a special tune.


After he completed his mountainside recital, the miners would applaud with the sound echoing off the canyon walls.

According to Nathan Abels, who wrote several pieces about the fellow, Griffin ran the Seven Thirty Mine with his brother on Silver Plume Mountain in the 1880s. Legend has it that his fiancée died the day before their wedding and to escape his grief he joined the Colorado gold rush. He lived in a cabin near the mine and played the violin every night to an appreciative audience in the town of Silver Plume below. The story ends tragically when he takes his own life in a grave of his own making after playing his last notes on violin. Over the years, people have asserted that Clifford Griffin can still be heard playing his melancholic solos on summer evenings over Silver Plume.

After leaving his family and Brand Hall estate in England, Clifford continued drifting – searching for contentment and meaningful work. It was said that “although he performed his duties as superintendent of the Seven Thirty Mine with excellence, he showed no enthusiasm,” according to account by historian Maryjoy Martin.

Many tales circulate about the town of Silver Plume itself. One involves its naming. According to records and legends, Louis Dupuy, the owner of the Hotel De Paris, was also a newspaper editor for the town. When miners from Silver Plume brought him samples of the town's ore and asked him what they should name the small camp, he allegedly wrote a short poem on the spot:

Who delve in deep mines' gloom,

To honor men who dig for gold,

For ladies whom their arms enfold,


According to legend, Griffin spent time state of New York, where he was raised. Griffin became engaged in New York, but his fiancé tragically, and mysteriously, died the night before their wedding. Her death was contributed to unnameable "natural causes", and to escape the painful memories of his beloved, he moved to Colorado with his brother, who eventually became the owner of the 7:30 Mine (so named because their day shift started a generous hour later than the other mines, who started at 6:30 AM). Clifford became the manager of the 7:30, and was much loved by his miners for his kindness.

Also according to local lore, every Christmas he bought all his miners a goose for their families, and every Fourth of July, he paid off every bar between Silver Plume and current-day Bakerville 4 miles (6 km) to the west, so his miners could enjoy their holiday without spending their family's money. Not only did he take care of his miners, every evening he provided them with entertainment as well. Since he could not bear the daily sight of his men with their wives and families after his tragedy, he spent a great deal of time near the entrance to the 7:30, which sits about 1,500 feet (460 m) above the town of Silver Plume. Every evening he would sit near the edge of a nearby cliff and play his violin. With incredible acoustics of the valley, the entire town could step outside and listen to his concerts. According to local legend, one evening, after a particularly beautiful recital, the residents heard a gunshot. Assuming the worst, the miners of the 7:30 raced up the trail to the entrance, and there they found Clifford Griffin, shot through the heart, in a grave he'd dug himself. A note in the nearby Manager's Office told the tale. It asked the residents of Silver Plume to leave him where he lay, because that's where he'd experienced the most happiness since his wife died. Not only did they follow his request, the town erected a 10-foot-tall Gunnison Granite monument in his honor, directly on top of his grave site. The monument can still be seen today, on the cliffs directly in front of the 7:30 Mine.

Author Jenny Griffin, (no relation) writes of the story:

"There’s the obelisk grave of Clifford Griffin, set on a scenic mountain ridge 1500 feet above Silver Plume. Born in Shropshire, England at Brand Estate in 1847, Griffin was the son of Alfred Griffin Esquire. He was known to be something of a searcher, restless, and attracted to nature. Though he had envisioned studying poetry at university, he had been dissuaded by his father.

Griffin left England and headed to Colorado and the mining boom in part to escape grief and loss. He lost his fiance the night before their intended wedding, her death wrenching and unexpected. Griffin’s brother, Heneage Griffin, owned the eponymous Seven-Thirty Mine in Silver Plume, named explicitly for the start of its shift time. Clifford Griffin was hired as superintendent of the mine. And while mining proved financially enriching, happiness continued to elude Griffin. A skilled violinist, he was said to have mourned his fiance by playing violin music each evening from the front stoop of his cabin, set high above Silver Plume amid sharp canyons, right next to the mine. Townspeople below would listen each evening, lingering outdoors in fading light to enjoy his impromptu concerts. Until one night the music stopped. Griffin dropped his violin and shot himself next to a neatly prepared stone grave. A suicide note specified his intent to be buried there. His grieving family installed a plaque, commemorating his life and death in 1887. 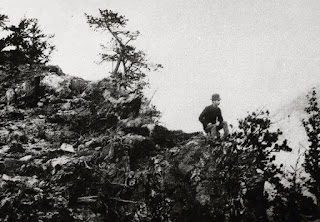 1. Griffin Memorial on Silver Plume Mountain near Silver Plume (Clear Creek County), Colorado. Photo by Thomas Noel (Dr. Colorado) The monument marks the grave of Clifford Griffin, the co-owner of the Seven-Thirty Mine. On June 19, 1887 Griffin committed suicide and shot himself in a grave he had dug. His brother, Heneage Griffin, erected this monument. The monument reads, "Clifford Griffin Son of Alfred Griffin ESQ, of Brand Hall, Shropshire, England Born July 2, 1847. Died June 19, 1887. And in Consideration of His Own Request Buried Near This Spot."

2. A photo or line drawing reportedly of Clifford Griffin high above Silver Plume.