One of the costliest disasters in Colorado history

“Eventually, all things merge into one, and a river runs through it. The river was cut by the world's great flood and runs over rocks from the basement of time. On some of the rocks are timeless raindrops. Under the rocks are the words, and some of the words are theirs.
I am haunted by waters.”
― Norman Maclean, A River Runs Through it and Other Stories 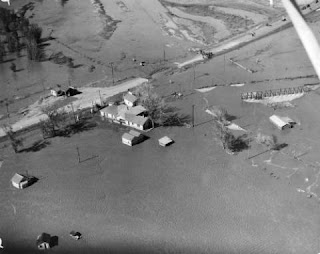 Memorial Day Flood of 1935 ranks in the top three

Few people are still around that remember the big rain, and resulting flood of Memorial Day, 1935.
It has been overshadowed by more-recent events, like the tragic Big Thompson Flood that killed more than 140 people in late July, 1976, right as Colorado was celebrating its Centennial. And there is the 2013 Colorado Front Range Flood, that began with rain falling on September 11, 2013, as a slow-moving cold front stalled over Colorado, clashing with warm humid monsoon air from the south. Heavy rain and catastrophic flooding along Colorado's Front Range from Colorado Springs north to Fort Collins followed.  Boulder County took the worst hit, with 9.08 inches recorded September 12 and up to 17 inches of rain recorded by September 15, which is comparable to Boulder County's average annual precipitation of 20.7 inches.
But the 1935 event probably ranks in the top three flooding disasters here.
"The most extreme rainfall event on record in Colorado was that of May 30-31, 1935. In an event that strains credulity, an astonishing 24” of rain fell in six hours (22.80” of which fell in just four hours) at two locations in eastern Colorado on the afternoon and evening of May 30, 1935," writes Christopher C. Burt of the Weather Underground.
"The amounts were recorded at two remote sites located about a hundred miles apart, Gauge #Sec. 34, T9S, R564W was located about 25 miles northeast of Colorado Springs, and Gauge #AB Sec. 26, T5S, R55W, just north of Burlington, near the Kansas border. The amounts of rainfall were recorded five hours apart, at Gauge #34 between noon and 6 p.m., and at #26 between 7 p.m. and 3 a.m. A third gauge halfway between the two picked up 11” in three hours, between 6 p.m. and 9 p.m."
The Weather Bureau’s Climatological Data, Colorado Section, May, 1935, reported the following in the Monthly Review:
"On the 30th, excessive local downpours occurred in the vicinity of Colorado Springs and along the northern slope of the Arkansas-Platte Divide. Four lives were lost and a total estimated property damage of $1,800,000 [about $20 million adjusted for current dollars] occurred along Monument Creek and Fountain Creek in Colorado Springs and vicinity. At the height of the flood, skies over extreme eastern counties (where the phenomenal rainfalls were recorded) were a chocolate brown. This was due to a most unusual situation. Along the Colorado-Kansas border there was a heavy dust storm. Clouds of dust could be seen for miles, while to the west torrents of floodwater roared, and at Bovina, hailstones, some as large as baseballs, were reported to have fallen. The coppery-hued sky cast a brown shadow, giving the scene a weird appearance. "
Burt says, in the end, at least 21 people were killed (and probably quite a few more) in floods statewide, and property damage totaled between $8 and $10 million (about $100 million in current dollars,) ranking this event as one of the costliest disasters in Colorado history. Combined with damage and fatalities in Nebraska and Kansas, the storm may actually have killed 113 and caused $800 million (1997 adjusted) in damages.

Photo Info:
1. June 1 and 2, 1935, An aerial view of a flood in Iliff, Colorado, downstream shows rippling water covering fields; houses and farm buildings are surrounded. A gas station and a dirt road are still dry except for a washed-out area; clusters of people and automobiles are along the road.

2. On the Republican River in McCook, Nebraska, after rain fell first in Colorado.
Significant Flood Events in the Pikes Peak Region throughout the past century according to information from Pikes Peak Regional Building Department.

• July 26. 1885  — Flash Flood Swept Away Homes, People, and Livestock. A sudden downpour caused Shook’s Run, Fountain, and Cheyenne creeks to overflow. Railroad bridges on the old Manitou spur were wiped out, and the Rio Grande Bridge was destroyed. The storm dumped 16 inches of rain and hail in one hour, devastating downtown Colorado Spring s. There was one victim.

• September 1, 1929 — Flood Hits Summer Homes - Mountain Resort is wiped out. College Gulch was flooded by a 15 foot wall of water caused by the breaking of dams on Ute Pass  Fish Club. This wiped out Crystola and washed out the Midland tracks. There was one victim.

• May 31, 1935 — Monument Creek flooded within one hour, killing four people and causing $1.2
million in property damage (equal to $16.1 million, today). Memorial Day Flood Monument Creek floods 200 square blocks of the city and southern Colorado Springs was under water. Damages were estimated at $1.769 million. Monument creek had a peak flow of 50,000 cubic feet per second (CFS) into Fountain Creek. There were eight victims.

• May 1999 — National Disaster was declared after flooding in El Paso County. Infrastructure damage at over 80 sites in El Paso County. As much as 14.5 inches of rain fell in less than 48 hours (compared to average annual precipitation/rainfall of 17 to 19 inches). Over $30 million in damages. Waterlogged Four days of rain/snow: 13 inches in Seven Falls, 12.16 inches in Manitou Springs, 7.9 inches in Monument and Fountain Creek overflowed.