Characters of Teller County: Proceeds from gambling built a lot of Woodland Park 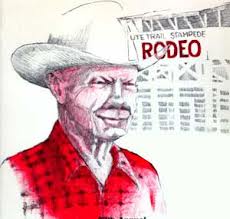 When Woodland Park's legendary figure "Big Bert" Bergstrom died on March 12, 1986, more than 500 people filed past his casket a few days later at Woodland Park Saddle Club Arena in the center of town.
A fitting tribute for the founder and main benefactor of the Woodland Park Santa Claus Club, the man who donated the ground for the Saddle Club itself, and the owner of several area gambling dens and houses of ill repute.
Even today, stories swirl around in the thin mountain air about the "big Swede" with heart of gold and a community conscience, along with the far-reaching illegal operations to help finance them.
“Through the generosity of Bert Bergstrom, new rodeo grounds were made available in the fall of ’49. The new grounds are located in the center of town, south of the business section. With the co-operation of the people of the county and active members of the Saddle Club, the new grounds are being completed with a race track and a grand stand to be built later,” reported the View.
A few years ago, in a conversation with Oscar Lindholm, who was 93 at the time, Bert Bergstrom was remembered as a “big, rough, tough Swede, saloonkeeper at the Ute Inn, 231 pounds, that could drink quite lot of beer.”
Oscar acknowledged, at the time, he could go through a fair amount of beer himself. But Big Bert and Oscar were not alone, especially when the Stampede was in town.
“… With the casino blaring away, all the local night spots lit up (and others?) and the square dance at the school ‘fillin’ up the floor’, Everybody had a GOOD TIME,” according the 1950’ article in the paper.
Cowboys and spectator alike agreed, “It is the best arena in the state and so beautifully situated with Pikes Peak and the breath-taking mountain scenery in the background,” reported the View.
Gabe Brock, longtime owner of the Crystola Inn, remembered and  verified gambling in Woodland Park in the late 1940s and the early 1950s.
"He had 75 slot machines and I had 75 slot machines. We pooled them and put them out all over the county. We had sanction from Teller County Sheriff. We went along there for about four years without any trouble. We would rake a little off each week and with that we build the Woodland Park Community Church. The VFW was in trouble,  and Bert bought them a building behind the Ute Inn," remembered Brock, as quoted by Marron of the Courier.
The Eldorado Club, which later became Preschool in the Pines, was also one of Bert's gambling clubs, Brock told the paper.
"The proceeds from gambling built a lot of Woodland Park," he said, but it all ended in 1952 when a new mayor closed things down, according to Brock.
Posted by ___ Restless Native at 6:33 AM