We all should bone up on literacy, in the truest sense 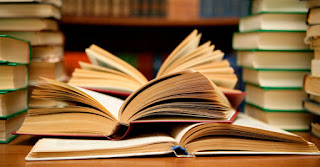 Truth is in trouble, no matter where you stand with individual candidates

It makes sense that I am big advocate for literacy — the ability read and write, and the related skills used in search of truth.  It was pretty much the hallmark of my very existence as newspaper guy. As the "X Files" taught us, "The truth is out there."
Others have taught us some with their writings, too.
“Frederick Douglass taught that literacy is the path from slavery to freedom. There are many kinds of slavery and many kinds of freedom, but reading is still the path,”said Carl Sagan, astronomer, cosmologist, astrophysicist, astrobiologist, author, science popularizer, and science communicator.
But anyone following the current election cycle can see that the truth is in trouble, no matter where you stand with individual candidates.
Writer James Patterson, who himself has written more than 147 novels that have sold more than 300 million copies, puts it this way.
"We are becoming a nation of functional illiterates scattered along the tracks, incapable of pursuing a train of thought for more than minutes at a time," he says.
"We have let our standards fall so far that this year's first-time voters are, on average, in the habit of reading for personal interest less than 10 minutes a day," according to Patterson.
Citing information from the Bureau of Labor Statistics, people 75 and older read about an hour a day. "The habit drops off through each 10-year bracket below that until you get to people ages 35 to 44 years old. They are reading 12 minutes on Saturdays and Sundays, and less than 10 minutes during the week. Younger than that, it only gets worse."
Patterson says, "We are becoming a nation of distracted nincompoops who don't have the patience to bother finding out if lies are lies — because we have lost the mental capacity to do otherwise — are forced to judge issues on the basis of style and delivery rather than substance and accuracy."
He is not the only one complaining that political debate has become unhinged from reality. And politicians have never had the reputation of being too closely associated with the truth.
After all, "In politics, stupidity is not a handicap,” as noted by Napoléon Bonaparte.
But people were at one time, better equipped to call 'baloney' on trickery, deceit, and hogwash.
I actually quoted a politician, accused of not knowing the facts in one instance,  saying,  "I guess I'll have to bone up on that."
Quit staring at the posts, Memes and Tweets on the phone, and think about literacy.
"Not the literacy of being able to sound out the words above a Facebook post. Not the literacy of knowing what LMAO means in a text message. Not even the literacy required to read the instructions on your College Boards," as Patterson notes.
Maybe we should all hit the books, volunteer at the library, and read newspapers.