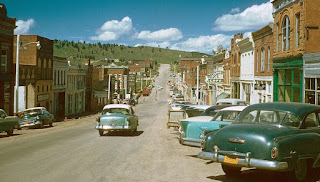 While it may be true as Ambrose Bierce said, that the gambling known as business —  looks with austere disfavor upon the business known as gambling. But over the last quarter century here in Colorado, the gambling business has prospered. Colorado voters made that decision one cold, snowy Tuesday more than a quarter century ago.
As Sports Illustrated's Micheal McCann recently notes, U.S. Supreme Court Justice Samuel Alito’s opinion in Murphy v. NCAA on Monday makes it clear: The federal Professional and Amateur Sports Protection Act (PASPA) is unconstitutional, and any and all of the 50 states can now legalize sports betting.  the ruling rejects arguments raised by the pro leagues, the NCAA and the U.S. Department of Justice. It also endorses a viewpoint that states ought to have the autonomy to determine whether sports betting should be a lawful or unlawful activity. That is expected to have far-reaching effects in the gambling industry.
But back here in Colorado, "Despite a snow storm that left roads icy and snowy, Teller County residents and residents statewide came out to vote for Amendment 4. The amendment allows $5 bets on black jack and poker and slot machines in businesses housed in historic buildings in Cripple Creek, Central City and Blackhawk," wrote Courier editor Ruth Zirkle at the time.
"The amendment won big in Teller County with a 70 percent margin. Cripple Creek and Victor precincts approved the amendment two to one. Statewide, the last results before press time early Wednesday morning were 56 percent for, to 44 percent against." the Courier reported Thursday, November 6, 1990.
"While city officials are working to beat problems before they occur and make sure things go more smoothly than they did in Deadwood, S.D., one year ago, business deals are booming, buildings are selling, and owners are making plans for gambling halls"
"A group from Deadwood, S.D., was at the gathering Saturday night and they already have plans for two buildings purchased earlier this fall. The Orange Door and the Theater of Time next door will be restored and run as gambling-related businesses.
In addition, at least two Cripple Creek business owners plans for gambling. Steve Makin and the Imperial Hotel already has plans for 'back room' gambling at the Imperial and former Teller County Commissioner June Fuhlrodt of Victor, announced plans for cafe/bar/gambling parlour at 100 Bennett Avenue, the location of her present antique store."
"And while new businesses are being planned, at least one business owner hopes to wash his hands of Cripple Creek and gambling. Clive and Diane Smith, who own two buildings and three houses, put 'for sale' signs in their windows Wednesday morning," reported Zirkle.
"It won't do any good for my store. I would have to put in slots or a bar," said Smith. He and his wife run a fine gift store and don't think people interested in gambling won't be interested in fine gifts. If the Smiths can get the price they want from the buildings they will sell."
Amendment 4, legalizing gambling, results in Teller County at the time were 3,301 votes approving the measure and 1,384 rejecting it. Statewide 574,620 voted for the measure, and 428,096 voted against, about a 57 percent to 42 percent spread, when all the totals were in.
Limited gaming began in Colorado on October 1, 1991, with a total of 11 casinos open statewide, according to the 2013 Factbook and Abstract by the Colorado Division of Gaming.
Colorado had its greatest number of casinos in November 1992, with 76 operating statewide.
At the 22‐year mark on October 1, 2013, there were 39 gaming establishments open in Colorado, a number that has remained fairly constant for several years, with the annual number averaging between 39 and 41 casinos since 2008.   Gross revenues generated by casinos on a monthly basis have increased from nearly $8.4 million during the first month of operation to a high of more than $76.5 million in July 2007.  During the first 22 years of gaming in Colorado, casinos paid nearly $1.8 billion in gaming tax revenues to the state on $13.3 billion in adjusted gross revenues. That money has been used to fund state historical restoration projects, community colleges, mitigate the impacts to state and local governments caused by gaming, and finance on‐going regulation of the gaming industry, according to the Division of Gaming.
On November 4, 2008, Colorado voters approved Amendment 50, which gave the electorate in Black Hawk, Central City and Cripple Creek the option to approve 24‐hour gaming, adding the games of craps and/or roulette, and raising the maximum wager limit up to $100.   The amendment required additional state revenues generated by the changes to be distributed to community colleges and to the gaming towns and counties. Amendment 50 also required voter approval for any increase in gaming tax rates beyond the rates and levels in place as of July 1, 2008. Voters in all three towns approved the changes for casinos in their communities, and the changes went into effect July 2, 2009.
In 2015, Cripple Creek decided to allow the serving of alcohol around the clock.