Still eating is enough, here in the hardscrabble 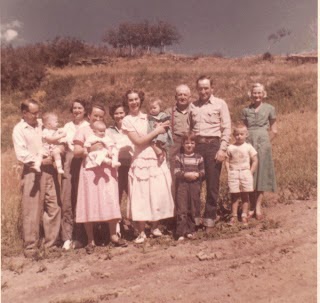 His answer was always the same: “Still eating.”
Rain or shine, good times or bad, my grandfather always answered that way, when anybody asked him, “How is it going?” or “How are you?” or “How do you do?”
He had other little endearing comments and sayings of course (for example, calling black table pepper the Sioux word for fly poop). But “Still eating,” was his trademark and it reflected his hardscrabble existence as a homestead rancher on the Western Slope of Colorado.
Owen Carrigan, my granddad, filed his first Colorado homestead claim 1914. After subsequently 'proving up' on that, and additional filings, he ran cattle, sheep and other livestock and harvested alfalfa hay for nearly half a century on Morapos Creek near the Hamilton turnoff, between Craig and Meeker.
Prior to that, he hailed from Minnesota country, by way of the Dakotas. He came here to escape Asthma and finish recovering from a broken leg he suffered when a horse fell with him while punching cows for a Texas-owned outfit in the Dakotas.
His mother, Minnie Buce Carrigan, wrote the popular book “Captured by the Indians, Reminiscences of Pioneer Life in Minnesota.” It is an account of the murder of her father, mother, two sisters, and her captivity among the Sioux after the 1862 uprising and her subsequent experience as an orphan. In the book, she describes her life as a young German immigrant girl prior to her capture and the ten weeks she lived with her captors until being freed by the United States Army.
In a state where “whiskey is for drinking and water is for fighting over,” two bodies of water in Rio Blanco County bear granddad’s name, Owen Carrigan Reservoir and Owen Carrigan Ditch. I am proud of the fact that, as a family, we go way back around here. Not everyone can say that.
Even after he sold the ranch, he counted irrigation as one of his favorite chores. He liked to make the ditches run. I am probably around to tell stories today, however, because he had a healthy respect for fast moving water. He saved my life one morning when I was about six or seven when he fished me out of the opening in irrigation tube near the 'Grand' as he called it, or Colorado River, before I could be sucked down the tube into oblivion.
Grandma would have given him hell, however, if he somehow managed to allow one of the grandkids to drown while he was checking ditches.
When I was very young, my grandfather would take me with him as he caroused downtown Grand Junction. The trip usually involved a jaunt into a hardware store where he ended up buying me something like an electric drill, or bench vice, or a set of wood chisels.
I think his reasoning was twofold. He was concerned about whether or not I would have the proper tools to survive in the modern world; and he wanted to encourage my creative side, that he saw when I spent hours trying to make boats, cars, spaceships, and such, with the tools on his extensive work bench at the back of his house.
He was a pretty fair blacksmith, ferrier, and agricultural mechanic, himself. Though he tended to cobble stuff together, using whatever scrap material he could scare up.
Another part of those downtown trips involved a stop at one or more bars in town. My granddad liked to make his own beer, but he also always enjoyed company while he drank it. And the bars offered that. That might have been where I picked up my eventual calling — as I listened and learned the art of story telling from the old cowboys, and steam tractor mechanics, and loggers and miners and bums.
Some of the stories were even about him, though I was young enough, and was mostly concerned with the Coca-Cola in a beer glass, I don't recall all the details.
Always, always, always, the folks in the bar seemed to enjoy the salutatory greeting when his shadow graced the door. "“How is it going?” or “How are you?” or “Howdy do?” they called out.
But as my grandfather was prone to say, there really was only one answer that could come back.
“Still eating,” his reply. And that was more than enough, then.