Turning the radio off on my way in 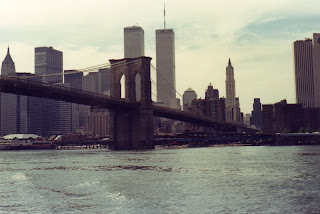 In the days and weeks, and now years, that followed, everyone develops their own reactions, opinions, emotions, and understanding of what that day means.

“9/11” of course, is shorthand for four coordinated terrorist attacks carried out by al-Qaeda, an
Islamist extremist group, that occurred on the morning of September 11, 2001.
The attacks killed 2,977 people.
A dozen years later, nearly every American can recall what they were doing that morning, and has some sort of story.
Maybe not profound, or inspiring, or perhaps even interesting, the stories mark the watershed moment for their owners.
Like many days, today for example, my experience started when I hopped in the car, and headed to work at our office in Woodland Park.
Editor Donna Richards was on vacation that week, and the lead reporter at the time, Charles Jones, was charged with putting together the paper that morning.  Usually, both before and after —even today,  I listen to the news on the radio on my way up the Pass.
But for some reason that day, I snaked my way up U.S. 24 in silence.
It is odd, but I remember John Shubin, who was in charge of publicity for "Cruise Above the  Clouds," was scheduled to meet me that day to go over the upcoming event.
When I arrived at the Courier, at about 8:15 a.m. in 2001, it was surreal how subdued and troubled everyone was. Still completely in the dark, I sensed immediately that something was terribly wrong (but until that moment of arrival, was clueless).
In the days and weeks, and now years, that followed, everyone develops their own reactions, opinions, emotions, and understanding of what that day means.
I recall talking later to my Dad about that, and the similarities of his recollection of the attack on Pearl Harbor, many years prior.
"Before, with Pearl Harbor, we were gathered around, trying to figure out what was happening by listening to a car radio."
But this was different.
"Much more terrifying and real," he pronounced. "I saw the planes hit the building, I saw people leaping, I saw the building drop. I saw them dying."
Since, I have talked to a few who were there in New York, and in Washington, and in planes kept in the air, and others who went there shortly after to help.
I saw the whole experience change people, and it probably changed me.
Todd Vess, a fellow publisher at the time at the Windsor Beacon, was at a conference in Washington then. I recall him telling me later, that what he saw that day, prompted him to scrap the journalism gig, and become a firefighter.
Since that time, locally we have been through the worst fire in Colorado history, and then a worse one, and then another. In the Pass, the guardrails are still choked with debris from a killing flood and slide. We endure wars in the Middle East, theater shootings, correction official assassinations, campus evacuations, and the threat of even worse. But endure, we do.
On this anniversary, 12 years and counting, it is odd that I run into to Vess, once again, as make arrangements to bury my dad. Vess is still a firefighter, and a part-time funeral director,  and we all are still changed.
I plan to turn my radio off on the way in today, when I hop into the car and head for Woodland Park.  We have 'Cruise Above the Clouds' story and photos in this week's paper.