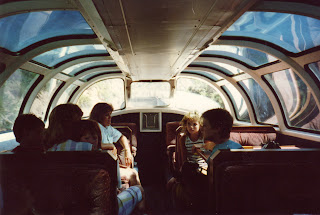 Built in 1948, Silver Solarium ran in service for the original California Zephyr for 20 years until that train was discontinued in 1970

For 21 years and two days, the California Zephyr moved passengers from San Francisco to Chicago in “the train of tomorrow.”

My co-worker at Colorado Press, Laura Higashi and her husband Tom, recall their ride on a just a piece of the Zephyr, the Silver Solarium, as “truly a once-in-a-lifetime experience.”

“When the Silver Solarium, one of the old California Zephyr railcars, left Denver’s Union Station for Glenwood Springs on August 1, 1987, and we were on it,” wrote Higashi. “The railcar’s owners, Nav and Snick Fosse, are the parents of our close friends, hence the invitation to ride."

On the invitation from Fosse for a wine and cheese party on the railcar the day before, it said “For twenty-one years, ending March 1970, this unforgettable stainless steel ‘cruise ship’ ran between Chicago and San Francisco. Owned and operated by three railroads, the Burlington, Rio Grande and Western Pacific, this greatest Zephyr was designed and scheduled for comfort and superb scenery, crossing Colorado’s Rocky Mountains and descending Feather River Canyon in California by daylight. One of the famous tailend cars has now been fully restored to better than new condition by Nav and Snick Fosse of Nashua, Iowa. The Silver Solarium is mechanically compatible to Amtrak’s latest equipment, yet it retains the charm of her famous days in California Zephyr service.”

Born from the Exposition Flyer idea back in late 1930s, and trussed up with the Burlington road’s new revolution in streamlined, diesel-powered passenger trains, came the Burlington's Zephyrs, which the CZ was but one of many. Created from a Partnership between the WP, D&RGW and the Burlington, and the initial orders were placed with Budd Manufacturing Company. 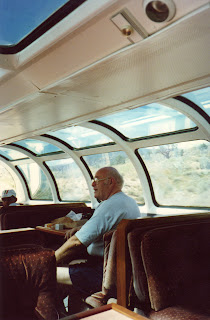 The special train took another leap forward when “C. R. Osborn, General Manager of GM's Electro-Motive Division, riding through Colorado's Glenwood Canyon on Independence Day, 1944, in one of his Company's new diesels, was struck by how dramatic the scenery appeared from his perch in the cab of his F-unit. When a man in his position gets an idea, it gets accomplished, and thus the Vista-Dome car was born. The first was rebuilt from a standard Budd chair car, and was an instant success. GM's Train of Tomorrow touted several of the gleaming beauties on its tour of the country, and soon they became a hallmark of the Burlington's Zephyr fleet,” according to “A History of the California Zephyr,” by John Wilson and Alan Radecki. 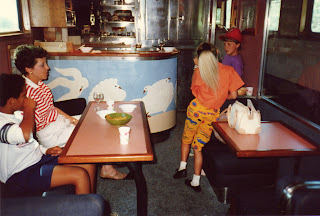 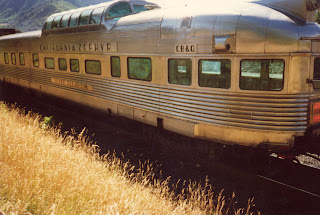 Commonly called “the Silver Lady,” the first train was christened in San Francisco by Eleanor Parker while California Lieutenant Governor Goodwin Knight, Mayor of San Francisco Elmer Robinson, and Western Pacific President Harry A. Mitchell looked on. For the inaugural run in 1949, every female passenger on the train was given a corsage of "silver" and orange orchids that were specially flown in from Hilo, Hawaii. The women who worked as car hostesses on this train were known as "Zephyrettes."

Built in 1948, Silver Solarium ran in service for the original California Zephyr for 20 years until that train was discontinued in 1970. Amtrak purchased the Vista-dome in 1971 and used it for long-distance service until 1980, when it was retired by the arrival of the Superliners. The first private owner purchased the car from Amtrak in 1985. During its lifetime of regular service, Silver Solarium has traveled well over 7 million miles.

Silver Solarium was one of six Dome Sleeper Observation cars originally built for the California Zephyr. These cars were the 'Last Word' in passenger comfort and accommodation, and included a drawing room with shower, a glass-walled cocktail lounge under the dome, an observation lounge in the elegant round end, and of course the Vista-Dome which seated 24 sleeping car passengers, according to CalZephyrRailcar.com.

Literature from the company that now operates railcar charters of the Silver Solarium says, “When Silver Solarium was purchased from Amtrak, it contained neither dome windows nor the observation end windows. Mushrooms and trees were growing inside the car. Many years were spent refurbishing it to the condition you see today.

Silver Solarium received all new mechanical systems, and the Amtrak-mandated overhaul of its trucks, as well as installation of a new electrical system, which operates on power supplied by the locomotive, rather than power stored in batteries.

Silver Solarium is built of stainless steel, including most structural members. Silver Solarium features a depressed floor under the dome. This meant traditional car-building techniques were not feasible. Consequently, major structural loads are cantilevered through the dome structure to make up for the loss of a center sill. The soundness of this design was proven by the manufacturer, when the car was hydraulically squeezed, without deformation, to 1,800,000 pounds of force.”

Silver Solarium is over 85 feet long, 10 feet wide and 15 feet, 10 inches tall above the rails. It carries 500 gallons of water. The car weighs approximately 155,000 pounds. It seats up to 24 passengers at lounge tables in the vista-dome, 11 people in the observation lounge, and has beds for 11. Silver Solarium is home-ported in Oakland, California when not on charter.”

“Because of its historical significance, many photographers were seen on the route as we made our way out of Denver to Glenwood Springs. Mr. Fosse even offered a total stranger, a rail car buff, to join us on the ride to Glenwood Springs. Needless to say, that stranger also had the ride of his life,” says Laura Higashi.

“The curved bar area had a beautiful linoleum sculpture by French artist Pierre Bourdelle, a beautiful baby blue background with white birds adorning it. Every car had a different sculpture around the bar. When Mr. Fosse bought the railcar, the bar picture was covered with carpeting. Imagine the surprise when the carpet was removed and there was the original Bourdelle sculpture!," says Higashi.

where to buy train horns Initially Train Horns (T.H) were devices used to indicate to the people, the arrival of trains. They prove to be useful to the people crossing railway tracks or anywhere around it. They are generally very loud so that people know well in advance about the arrival of the train. Earlier they used to work on steam, now a days the horns use compressed air power