One never knows when the bullets will fly 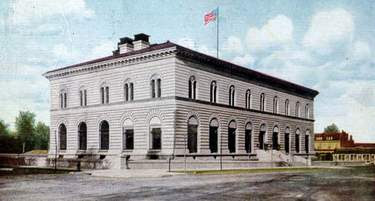 Nobody was ever charged in the broad daylight robbery of a Federal Reserve truck in front of the Denver mint.

I wrote this while working for the Colorado Press Association at its office which was then on Glenarm Place in Denver.

Almost every day as I come out of the back door of our office building, I glance down the alley and over at the mint across West Colfax Avenue — just to make sure no bullet-riddled black sedan full of armed highway men are engaged in a gun battle with guards from the Federal Reserve Bank and the mint.
One never knows. No one at the time thought all hell would break loose on December 18, 1922.
“Bandits in masks, numbering at least four and possibly seven, staged an audacious hold-up at the doorstep of the Government mint this morning, stole $200,000 in $5 bills from the truck of the Denver branch of the Federal Reserve Bank and made their escape after fatally shooting Charles Linton, a guard of the Reserve Bank truck,” led the New York Times Dec. 19, 1922 edition.
“The whole attack of the desperadoes was so well planned, so closely timed and so swiftly carried out that barely five minutes elapsed between the opening of fire from the sawed-off shotguns of two or three of the bandits to the rush from the scene of the car which brought the raiding party.”
The Time’s story noted the ensuing manhunt.
“Tonight every highway in the State is guarded and police and Federal authorities have armed squads out in pursuit of an automobile occupied by seven men who were seen speeding northward soon after the robbery. One of the occupants was bleeding profusely, having been wounded in the jaw by one of the mint guard, it is believed.”
Papers all over the county called it the boldest robbery ever known here.
“I heard a shot, then several. Then the general alarm going in the mint,” The Rocky Mountain News reported Mint Superintendent Robert Grant’s account. “Every man picked up a rifle and rushed to the door.””
But by that time, Linton had already been shot.
“I understand that the bandit car drove up just as our men had re-entered the mint,” Grant was quoted in the News. “It was nicely timed and the bandits evidently followed the bank truck from Arapahoe Street.”
According to the New York Times, “Assigned to the bank truck, in addition to Linton, were Wilbert Havenor, the driver; J.P. Adams and J.E. Olsen, cashier of the Reserve Bank, who has general charge of transferring the money.”
“Havenor had just come out of the mint with a sack full currency, making up a total of $200,000. The money was in 50 packages of $4,000 each, which were being put in the truck safe.
“The four members of the Reserve Bank crew had left the entrance of the mint and were walking toward their machine near the curb when another car drove up alongside the wire-enclosed money car. Two or three men carrying guns leaped from the car and with a shout of ‘Hands up!’ began to fire. Some say they shot at the bank crew, others think they aimed high at the mint building to terrorize all who might think of interfering,” reported the Times.
Linton, according to police reports of the incident, tried to throw money into the wire back compartment of the Federal Reserve truck and he was shot in the process. Hanover dived under the truck, and Adams found cover behind another nearby parked car. Olson headed toward the mint for help but by that time, alarms were sounding in the mint and as many as 50 guards armed themselves with rifles and shotguns and ran to the windows and doors and began firing.
“Concealed behind the Government car, the bandits coolly smashed open a window, lifted out the packages and shifted them with almost incredible rapidity into their own car,” said the Times account.
With alarms from the mint ringing continuously and bullets flying back and forth from the drumfire of bandits and the guards, the neighborhood was a battleground.
“So terrific was the gunfire that forty bullet holes can be counted in the transoms above the main entrance to the mint and in the windows of the second story. Windows in various stores and apartment houses across the street were riddled and there were many narrow escapes from bullets. One shot went through a window in Sylvania Hotel, at Court Place and West Colfax Avenue, and shattered a picture on the wall.”
After transferring the packages of money, one bandit, described as the leader and thought to have been the one who shot Charles Linton, jumped on the running boards of the getaway car.
“As the car gathered impetus the leader of the highwaymen, standing on the running board, turned toward the Government building as if to fire a final volley at the guards. As he did so, Peter Kiedinger, a guard, who was on duty at the main entrance, fired a rifle at the bandit. He was seen to crumple up on the running board and throw up his hands. He was pulled inside the car by the driver. One eyewitness said he was hit in the jaw,” the Times reported.
Police, offering rewards of more than $10,000 were never able identify any of the criminals with the exception of Nicholas “Chaw Jimmie” Trainor whose frozen body was discovered still inside the getaway car in Gilpin Street garage in Denver 18 days later. Secret Service agents recovered about $80,000 of the stolen mint money in a Minnesota hideout along with $73,000 in negotiable bonds from a Walnut Hills, Ohio robbery.
Nobody was ever charged in the broad daylight robbery of a Federal Reserve truck in front of the Denver mint.
Sometimes, when walking by there on my way home, I think I can still hear the distant gunfire, shotgun blasts, alarms and the squeal of tires, as the bandits make their getaway. One never knows.
###
Posted by ___ Restless Native at 2:16 PM