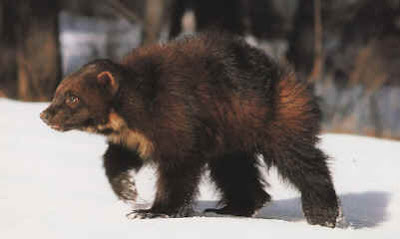 My dad, a life-long resident of the state and currently living in the southwestern corner, swears that there are wolverines in Colorado. Not only that, but he also claims he has spotted the beast twice in the last few years.
“From an official standpoint,” notes Tyler Baskfield, spokesman for the Colorado Division of Wildlife, “ They do not exist here in the state.”
“There are reported sightings throughout the state – mostly at higher elevations,” Baskfield acknowledges. The animals are difficult to document because “they roam 60 or so miles a day, that makes it hard to keep up with them.”
Not far from here, in February of 1966, came the report of the slaying of wolverine, at that time, the first verified in Colorado in more than 25 years.
“The animal was shot Friday by Roy Goecker of 4900 S. Wadsworth Blvd., Littleton, a professional guide, while he was hunting mountain lions along Pine Creek near Rampart Range in Douglas County,” wrote Al Nakkula of the Rocky Mountain News more than 40 years ago.
“Goecker told game officials his three hunting dogs came across the scent of the wolverine and pursued it into a rocky draw where the animal was cornered in deep snow. The guide said he was compelled to shoot the wolverine because of the known ferocious nature of the animal, to save his dogs.”
Nakkula’s Rocky Mountain News story at the time cited Herman Schultz, a wildlife conservation officer for the State Game, Fish and Parks Department, as saying the that the wolverine easily could have destroyed Goecker’s hunting dogs.
“He estimated the brown-black wolverine, a female about three feet long and weighing 21 pounds, was about 20 years old. Although the animal still had long sharp claws, her normal large fangs were nearly worn down to the gums because of age,” the report said.
According to San Francisco State University Department of Geography, the species officially named Gulo Gulo, but commonly known as wolverine, glutton, skunk bear, Indian devil, and carcajou, is a fairly elusive critter.
“Basic information on wolverine habitat relationships is almost non-existent,” says the University’s web site. “They generally inhabit areas above timberline, oftentimes preferring lower-elevation forests during winter. Wolverines occur in such low numbers across most of their remote habitat, and are so mobile; that it has been is extremely difficult to study them.”
“Healthy populations of wolverines appear to exist in Montana and Idaho, but scientists have been unable to locate populations in other plausible mountain locations, such as southwest Colorado or the Cascades of Washington,” says San Francisco State University’s site, “They have evaded trap and camera in California for over 75 years.”
The Department of Geography at Michigan State University (Wolverines) notes that extensive scientific efforts in California and Michigan have failed to prove that they still inhabit those states.
“Since 1979 Colorado wildlife officers have investigated more than 100 sightings and snow tracks, but by the time they return with a camera, the tracks have invariably drifted over. The closest they’ve come to a real wolverine was in 1982, when they nabbed an escapee from a Colorado Springs zoo who had gotten himself hopelessly tangled in a Denver window well,” according the Michigan State University’s Department of Geography web site.
###
Posted by ___ Restless Native at 9:00 PM