Horse sense not what it once was 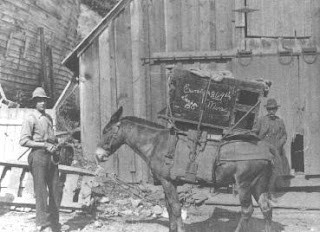 It is hard to think of it now, but maybe a person needed more acquired knowledge, more horse sense if you will, to get stuff back and forth from the mines a hundred years ago. Miners created such fascinating technology as a jig-back tram where a loaded bucket pulls the empty bucket back up the hill. But of course, they relied a lot on animal power.
“When I first came here in 1927, everything was handled with horses and mules,” says muleskinner Adolph Jordan in “The Way It Was, A Historical Narrative of Ouray County,” interviews compiled by David Bachman and Tod Bacigalupi. “Everything was freighted out of the mountains with wagons, two-horse, four horse, and six horse teams, hauling ore off the hills and supplies up to the mines. The small outfits packed the ore out and the supplies in on burros and mules. In the mornings there were quite a few horses and mules going up the street at six o’clock. You could hear the bell ringing, the muleskinners cussing, and the chains jangling. In the evening it would be the same when they came back in.”
Jordan said that a six-horse team had a line for each horse that stopped and started them and turned them right or left. Using that method, a driver could make each horse do different things, a necessary requirement when hauling load up the steep grades.
“When you are going up those switchbacks, the outside wheelhorse has to pull the whole load, sometimes as much as 30 feet. If all the horses pull at the same time, the back wheels of the wagon will go over the side. The horses that worked those big wagons weighed over a ton, maybe 2,300 or 2,400 pounds. You put a little horse in there and he can’t do it. He ain’t got the weight. And you don’t work the wheeler; only when you need them. The wheelers were the horse next to the wagon. The pointers were the middle two horses, and the leaders were the two front horses.”
It was very dangerous as well, if you didn’t know how to control your horses.
“They used to buy a lot of those big, old draft studs — stallions from the east. They were cranky. When you were driving them up the mountain and stopped to water them, you had to unhook the outside tugs on the wheelers so they could turn and get a drink from the trough. Sometimes one of those studs would grab the other one by the neck, and they would take the whole wagon over the hill. Kill them all. You could still see the wheels down in the creek a couple of years ago.”
And then there was the possibility of getting caught in a snow slide.
“I’ve had mules knocked down by the slides many times, but they usually get up on their own. They are stronger you know.” Jordan said.
“One time I was bringing some machinery down from the old U. S. Mill with a string of four mules. A slide about three or four feet thick and a hundred yards wide came down, and that thing knocked three of those mules’ feet out from under them. They rode on top of that slide down about a hundred yards. They was abouncing up and down; it looked like they were going up ten feet sometimes. It had skinned up their legs a little bit, but if they had gotten under it, the slide would have ground them up and killed them. But it threw them up in the air, and they lit on top of the snow. The lead rope was broken free. We always kept rotten pigtails on the packsaddles so if something did happen, they would break pretty easily. I went down, got the mules on their feet, straightened up the packsaddles, and led them up. They didn’t make hardly a dent in the snow where the slide had run. It was packed that hard. Yeah, them snow slides, they will do some freakish things.”
Horsepower and four-wheel drive is clearly not what it once was.
###
Posted by ___ Restless Native at 9:22 AM