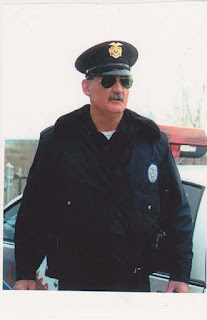 It is easy to get lost and stay lost out there

Some places in this world suffer from a crazed sort of meanness – violence, if you will. I have felt it in some parts of Nebraska, Nevada, areas in California, but maybe only in one locale in Colorado.
To put a name to it -- we might call it many things.
Chunks of emptiness carry names like Cajon Canyon, McElmo, Hovenweep, the lower Dolores watershed, the Paradox Valley, Outlaw Trail, and (appropriately enough) Disappointment. The vast stretches of canyons and mesas run up the edges of Colorado and Utah. It is remote, water-challenged, and easy to get lost and stay lost there. Even the rivers sometimes run the wrong way.
I, along with a lot of others, thought of that crazed meanness the day Dale Claxton was murdered.
On May 29, 1998 Cortez police officer Claxton was following a water truck that turned out later to be stolen. He had already radioed for backup when the truck pulled over on the edge of city limits and at least one of the three men inside jumped out with a SKS 7.62 mm assault rifle and began firing, eventually unloading the 30 round clip at least once into the squad car and Claxton. The officer was hit 18 times.
The three men immediately ditched the water truck and acquired by gunpoint a flatbed truck leading law enforcement on an intense chase and series of gun battles out into the canyon and mesa country along the Colorado and Utah border.
Before the rampage had ended, two Montezuma County deputies had been wounded, over 300 officers from four states and the National Guard had enlisted in the chase and search.
Police eventually identified three suspects that they were looking for.
The residence of Alan Pilon, Jason Wayne McVean and Robert Mathew Mason yielded evidence the three had practiced as weekend warriors and survivalists in nearby areas. Pilon actually grew up not too far from there, near the town of Dove Creek, Colorado.
In June, another shooting occurred involving a San Juan County, Utah, deputy Kelly Bradford, who was shot twice responding to reports of shots being fired at social worker in a remote Utah area. A new manhunt ensued and Robert Mathew Mason’s body was eventually found in that area, apparently dead from a self-inflicted gun shot, administered shortly after the exchange with Bradford. Alan Pilon’s body was discovered nearly 16 months later by a group of hunters in the same general area on the Colorado side of the border.
Longtime cowboy Eric Bayles in San Juan County, Utah finally discovered Jason Wayne McVean’s body, on June 10, 2007.
“Teams of deputies and police officers searched the area and found a rusted AK-47 rifle with magazines holding about 500 rounds of ammunition, five pipe bombs, several bottles with water still in them, some survival food, a jacket, a hat, camouflage gear, amber-colored glasses, a watch that stopped at 6:35 on May 30, 1998 and most importantly, parts of a human skeleton including pieces of a skull and a jawbone with teeth,” according to Hal Mansfield in a June, 2007, article for Crime Magazine.
“The remains turned out to be those of Jason Wayne McVean, one of three fugitives sought for the murder of Cortez, Colo. Police Officer Dale Claxton,” wrote Mansfield.
Still, no one really knows what kind of crazed meanness possessed the three outlaws who killed Officer Claxton. I guess the answers are like everything else out there in the dry, wind-swept canyons, mesas and draws. As I think I mentioned, it is easy to get lost and stay lost out there.
###
Posted by ___ Restless Native at 11:46 AM