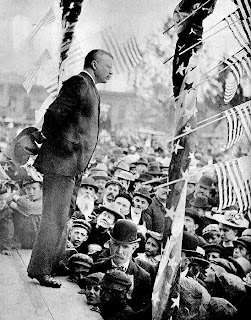 It has been a long time, but presidential candidates once thought a visit to Teller County was a required stop. Even if the locals were pretty rough on them when they arrived.On a campaign trip for President William McKinley in September of 1900, Theodore Roosevelt arrived in Victor in the hopes of polishing the shine in the gold camp with his candidate’s support for the permanent gold standard. Many Coloradans, however, did not approve of McKinley’s stance and favored instead a bimetallic monetary system and the free coinage of silver.
Newly-formed Teller County in fact had been named in honor of the most ardent supporter of “free silver,” Henry Teller. Teller and 22 other Republicans had walked out of 1896 Republican convention because of McKinley’s selection and his gold affectation.
Most miners in the district leaned toward “free silver” and another of its champions, William Jennings Bryan for president.
“To make matters worse, senators Lodge and Wolcott, outspoken opponents of Bryan, were to accompany Roosevelt.” notes Brian H. Levine, in his 1982 book “Lowell Thomas: Victor: The Man and the Town.”
“Rumblings of trouble were felt up and down Victor Avenue,” according to Levine. “When Roosevelt appeared at 5:15 p.m., he was greeted by cheers, music and pro-Bryanite banners.”
“Democratic hoodlums” interrupted his speech and fight broke out later when Wolcott leaned out the carriage and snatched a Bryan campaign sign away.
“The Republican Marching Club was quickly attacked. Free coinage demonstrators charged Roosevelt. Women and children joined the fight. The Gold Coin Band continued playing patriotic tunes,” writes Levine.
Roosevelt was barely able to scurry to the awaiting Midland train. In fact, he did have his pince-nez knocked from his face he might have been beamed by two-by-four wielded by a Bryan supporter if Danny Sullivan had not intervened. Sullivan reportedly received a red sapphire ring later as a measure of gratitude.
But the close call did not stop Roosevelt from returning to the district in August of 1901 as Vice President. He was welcomed this time in Victor and toured the Portland and Gold Coin mines, power lunched with Irving Howbert, Jimmy Burns, Spencer Penrose and Warren and Harry Woods, and shook thousands of hands at a reception in his honor.
The $500 worth of gold that the Vice President mined himself at the Gold Coin was sacked and presented to him as a present.
###
Posted by ___ Restless Native at 6:15 AM