Make sure they get your name down


Unfortunate, and unclear details surrounding the killing of 'Wild Bill'

If you do something of historic significance, make sure the chroniclers get you name down correctly. Otherwise you may suffer the fate of “Wild Bill.”
“During the summer of 1868, Indians caused a good deal of unrest in the Pike’s Peak region, and in late August, a group of them came to the Teachout ranch, looked over the livestock, and then left. After the incident, Harlow (Teachout) was concerned for the safety of his horses and put them to graze only for the night, keeping them in the coral by his stone barn during the day,” wrote John and Betsy Kitch in their 1970 book “Woodmen Valley: Stage Stop to Suburb.”
On the first morning in September that fall, Harlow and his hired hand made it out to the pasture just in time to see a group of braves driving off most of the 300 horses the Teachout brothers had brought from Nevada that spring.
“The two unarmed men, who could do nothing to stop the Indians, returned to the house and sent word to the brothers in Monument,” the Kitchs said.
“The next morning, Harlow, his brothers, and some forty friends started off to find the horses, following a clear trail of perhaps 150 head nearly to the Kansas border, but each day saw them farther behind. Finally the men gave up the chase and turned homeward.”
On the way home, 15 members of the party were attacked by another band of Indians about 25 miles east of Colorado City. The men were able to hole up near a bluff and hold off the attack, but had little food and no water.
“A young man known only as “Wild Bill” volunteered to seek help, and on the fastest horse available, he rode through the fusillade of shots from surrounding Indians. At daybreak, Teachout and his companions were surprised to see no sign of Indians, and ‘Wild Bill’ soon arrived with help. He had been lucky enough to find a group of Denver area men near the Bijou Basin, east of Black Forest,” according to Kitchs.
Another account appears in Loren Whittemore’s 1967 book “An Illustrated History of Ranching in the Pikes Peak Area.”
In Whittemore’s version, there seems to be some question on whether or not the attackers were really marauding Arapahos or Cheyennes.
“Miraculously, he ran the gauntlet of arrows and bullets, and disappeared into the West. The hostiles understood that reinforcements would soon be on the way, so after fighting for a short time, disappeared in the opposite direction. Some of the participants felt that not all of the hostiles were Indians, for as the battle began, one was heard to call out with an oath in perfect English, ‘You have been spoiling for a fight! Why don’t you pitch in!’” wrote Whittemore.
“The volunteer who rode out presents a rather interesting individual. Early writings about the region speak of him as ‘Texas Bill’ or ‘Indian Bill’ and ‘Wild Bill,’ but none record his last name.”
They do, however, record the name of the man who owned the horse he rode out on as Dow Simpson.
A few years later, Bill was reportedly working with some cattle in the Fountain area and became troubled by a disagreeable heifer. In a fit of anger, he threw a rock at her and by some freak circumstance; the stone stuck the animal in a manner that it killed the heifer. Bill was arrested for the killing.
“On the trip back to town the story tells that there were some obstacles across the road. As the sheriff got out of the spring wagon to remove them, a shot rang out from some nearby trees, killing Bill. There is no record of any investigation and the matter was left at that. The moral seems to be that a prize heifer in those days was of more worth than a man,” according to Whittemore.
Apparently his heroic ride, not unlike his last name, was all but forgotten.
Nearly a quarter of a century later, however, the government did see fit to reimburse the Teachout brothers for the loss of their horses.

Teachout Ranch, photographed sometime between 1860 and 1878:
A view of Teachout's Ranch near Edgerton, Colorado, includes a two-story gable-roofed building with a porch with Victorian decorative woodwork, and a smaller building nearby; numerous people stand near a board fence in front, including a seated elderly woman, a child holding a doll, a woman and child each on horseback, a seated man holding a rifle, and what appear to be ranch hands. Two wagons are in front of the fence. One is covered and is pulled by two horses with a man next to the horses. The other, also pulled by two horses is uncovered and has a man at the reins. Trees, another fence, and fields are in the background.
Western History/Genealogy Dept., Denver Public Library. 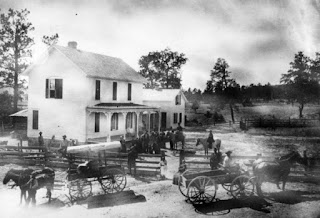