In the name of Chipeta 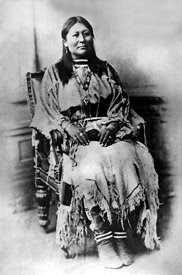 I know of at least four places in Colorado called Chipeta Park. All are named after the famous Ute leader Ouray’s wife, Chipeta. There is, of course, the local version in the Ute Pass, which was renamed that in 1927, but spelled slightly different with an extra “i.” City parks in Poncha Springs, Nederland and Montrose also carry the moniker.

Ouray, himself, has more than a few things named after him in the state, among them, the southwestern town and county down in the San Juans. Many label Ouray the last great chief of the Utes, but historian Abbott Fay says it isn’t so.

“Ute Indians roamed the mountains in extended family groups but did, on occasion, elect a spokesman, called ‘Avought Datwdtch’ for each particular band. These representatives were therefore considered leaders only in a vague sense. Certainly Ouray served the purpose on occasion for the Uncompahgre Utes, his own band, but probably had no real leadership over the other four groups,” Fay wrote in “I Never Knew That About Colorado.”

“There were five bands of that tribe here in Colorado, but white military men and politicians liked to deal with Ouray,” according to Fay.

Perhaps Ouray was just in the right places at the right times, and knew the right people, in order to secure such a prominent role in Colorado history.

More than a few historians link him and Kit Carson, as they grew up in New Mexico. He learned to speak both English and Spanish and had additional knowledge of the Jicarilla Apache culture of his father’s family. When the Kit Carson Treaty was breached by silver miners in 1872, Ouray met with Otto Mears, who had begun work on a new toll road in affected areas even before Congress ratified the treaty in April of 1874.

Mears reportedly offered the Utes (represented in this case by Ouray) an annual annuity of $25,000 a year and Ouray himself would also be paid $1,000 per year, to allow relocation again, according to historians John H. Monnett and Michael McCarthy. He was also asked to travel to Washington, on the government’s dime, to meet with the president.

But who was Chipeta? According to the Women of the West Museum in Denver, White Singing Bird, as Chipeta was also known, was born in 1843 and grew up in the south central mountains of Colorado. She married Ouray when she was 16. Press reports commented on her beauty and grace.

She was called Queen of the Utes, though the term was meant in a derogatory way by a Rocky Mountain News reporter who described her presiding over Ute “vermin” in her buckskin.

But then Denver poet Eugene Field wrote a poem dedicated to Chipeta and her role in saving white hostages from Utes after the Meeker Massacre, and an adoring public embraced her for her wisdom, beauty and grace. She became as famous as Ouray.

Today, there are streets, places and organizations all over Colorado and Utah named after Chipeta, writes Dr. Colorado Thomas Noel. Other items share the name as well. For example, the Colorado moth Tricholita chipeta and the potato variety developed by agronomist at Colorado State University in Fort Collins.
“When Chipeta was a baby, a band of Tabeguache Utes found her crawling in the ruins of a Kiowa Apache village, the only survivor of a savage attack.
The Utes adopted her and raised her as their own. She became a caretaker for Ouray’s son after Ouray’s first wife died. The two became close and married. Ouray and Chipeta were inseparable. It was rare for Ute women to travel with their men, but the two traveled together as Ouray negotiated with whites and other Ute leaders for Ute lands. Ouray received a salary for his role as an interpreter and hunter for the Los Pinos Agency. Other Utes became suspicious and assumed that the money he received was in return for selling off Ute lands.” Noel writes.

But while Ouray was no longer welcome with certain Ute bands, Chipeta was accepted with open arms by everyone, according to Noel.

“The counsel she kept with other Utes became invaluable to Ouray. Soon, Chipeta was giving counsel to visiting chiefs, tribal headmen and U.S. functionaries. She continued in this role for the rest of her life. It was Chipeta who stayed up all night with Ouray as the White River Utes fought with the U.S. Cavalry up north, convincing him not to ride to their aid and thus, preserving what peace the Utes had left. After Ouray died and the Utes were stripped of their remaining Colorado lands, she continued to advocate for her people and for peace.”

“After being banished to Utah, she was forgotten. On the Uintah Reservation, the Utes faced a harsh climate far different than their ancestral homelands in Colorado. They were told to farm, but most of the land wasn’t arable. The government allowed miners and others to trick the Utes and steal land from them. Chipeta survived on government commodities. Then the government subdivided the reservation and took more land away. Yet Chipeta’s spirit wasn’t broken and she still spoke for many Utes. In 1897, her brother McCook represented her opinions in Washington D.C.,” according to Noel.

The public began to notice her again. People sent her gifts. She was invited to Colorado to visit Montrose and the Uncompahgre Plateau.

“President Taft insisted she ride with him on his train to watch the opening of the Gunnison Tunnel. She was once again Queen of the Utes,” Noel said.

She died in 1924 on the reservation in Utah.

“When she died, the city of Montrose insisted she be exhumed from her humble grave in Utah and buried in Montrose in an elaborate ceremony,” Noel said. “Her brother McCook agreed and today, she rests there in her ancestral homeland.”
Chipeta, who had been known to dine with Kit Carson’s family and in the lavish homes of Indian affairs agents, was eulogized in Washington D.C. newspapers and was well-loved.
###
By Rob Carrigan
###
Top Photo Information:
Chipeta in a visit to Washington D.C.
Bottom photo:
Chipeta as an older woman, near Montrose, about the time of completion of the Gunnison Tunnel. 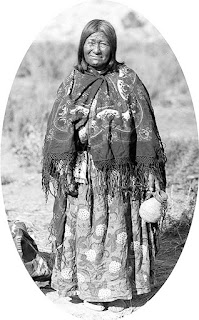