Boss of the plains 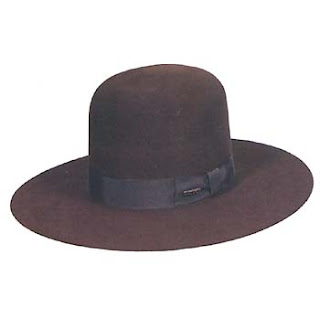 “Local legend makers would like us to believe that the original cowboy hat was created while John B. Stetson was camped along Monument Creek near the present day location of the Professional Rodeo Cowboy Association building. That cannot be substantiated,” writes Loren R. Whittemore in “An Illustrated History of Ranching in the Pikes Peak Region.
The story is that John Stetson and companions, seeking benefits of a drier climate hunted in the area in the early 1860s. According to the legend, he tried to impress his hunting buddies by showing them how he could make cloth out of fur without weaving. He created an unusually large-brimmed hat with a high crown that he wore the rest of the trip and grew quite fond of. The hats benefits included an insulating pocket of air, the ability to carry water if needed, and extra protection for western weather.
Later, when he returned to Philadelphia, he began making and selling the hats and the rest, I guess, is history.
“In 1865, with $100, John B. Stetson rented a small room, bought tools he needed, bought $10 worth of fur and the John B. Stetson Hat Company was born. A year later the “Hat of the West” or the now famous “Boss of the Plains” hat was born and the name Stetson was on its way to becoming the mark of quality, durability, innovation and beauty,” according to the company’s web site.
An alternate version of the story holds that hat of that style was already being produced at Christy’s Hats from Frampton Cotrerell in Bristol, England.
“The main business was trading with the West Indies, making large brimmed felt hats for slaves harvesting sugar cane in the rainy season,” according to Wikipedia.
Christy’s, which owned the patent and Stetson, took the battle to the courts. Christy’s won that battle but apparently lost the war. By 1886 Stetson’s hat company was the largest in the world.
The authentic Stetson hat still enjoys widespread popularity in a great number of local and international venues and traditions. A flat-brimmed Stetson is included in the official uniform of the Royal Canadian Mounted Police Red Serge. The hat replaced pith helmets that were worn until that time.
Locally, the receipt of a “Senior Stetson” at Colorado School of Mines has marked the beginning of the last year for engineers since 1905. The tradition originated for freshly graduated engineers to avoid having a clean hat that marked them as “greenhorns” in the mining industry.
Stetson Hat Company continues to make hats in their factory in Garland, Texas and the hats are among the most well known in the world.
###
Posted by ___ Restless Native at 3:29 PM