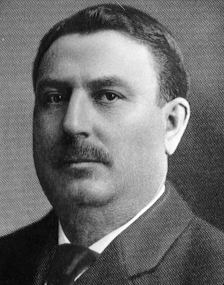 While working Colorado Springs capitalists, he became interested in the oil industry, later making his fortune by opening a number of Wyoming oil fields

Threads that connect Governor Oliver Henry Shoup to this area are woven into to the very fabric of Pikes Peak area history. Shoup, a rancher and businessman of Colorado Springs, served two terms from 1919 to 1923.
Something as basic as a Colorado workhorse, bred for cow savvy and performance capabilities, reflects those ties. The linage of the legendary “Colorado Ranger Horse” breed for example, can be traced to one of two sires: Patches #1Z and/or Max #2Z. Patches was a descendant of horse given to Ulysses S. Grant by the Sultan Abdul Hamid of Turkey. Max came from Shoup’s ranch north of Colorado Springs.
Oliver’s son, Merrill E. Shoup, was president of the Golden Cycle and the Holly Sugar Corporations, as well as numerous other companies originally controlled by Cripple Creek empire builder, A.E. Carlton.
The younger Shoup is credited (through his congressional testimony) with helping to get the government to raise the price of gold over the pegged rate of $35 per ounce and lobbied to keep limited production going after the government declared gold mining non-essential to the war effort.
The elder Shoup, Oliver, began his business career in 1888 with a job at General William J. Palmer’s Colorado Springs Company, according to James Chipman and Erin McDanal, staff archivists at the Colorado State Archives.
“Eight years later he was offered the position of private secretary to Verner Z. Reed, a wealthy mining man, who at that time was conducting an investment and real estate business. After a few years, he became general manager of Reed’s extensive enterprises. While working with Reed and other Colorado Springs capitalists, he became interested in the oil industry, later making his fortune by opening a number of Wyoming oil fields. He was the first president of the Midwest Oil Company; and in 1914, he became the first president of the Midwest Refining Company. Two years later, he retired from active participation in the oil business and devoted his time to stock raising and agricultural development throughout the state,” says the state archive.
Oliver Shoup was also a primary management influence and owner of the Edgar Box and Lumber Company that leased and cut timber for a sawmill located on land in the Black
Forest area owned by Cort Burgess.
“Perhaps what Shoup is best known for his efforts to develop the Moffat Railroad Tunnel project which was one of the world’s greatest engineering feats. He labored persistently to have the six-mile tunnel bored through the Continental Divide,” says archivists for the state.
“On June 3, 1921, after three days of torrential rain, the Arkansas River swelled over its banks, driving into and through the city of Pueblo and down the valley, killing more than 100 people. The deluge also carried with it 600 houses and estimated $19,000,000 worth of property was destroyed.
“Governor Shoup responded by summoning the legislature into a special session. Legislation was passed allowing for the construction of flood control installations at Pueblo. Piggy-backed onto this legislation was a bill allowing for the construction of the Moffat Tunnel. Both concepts were passed at the same time in order to get support from the southern counties for construction of the railroad tunnel. There had been opposition to the Moffat Tunnel in the past, because the more southern Arkansas Canyon had been the main railroad route through the mountains. Now, the northern tunnel would be the main railroad gateway through the Rockies. Finally, and largely through Shoup’s efforts, the Moffat Tunnel was begun in 1923.”
That action caused a tremendous amount of hard feelings in southern Colorado aimed at the northern portion of the state, and leadership from the Colorado Springs area.
“Some believe the resentment in Pueblo, caused by what is essentially political blackmail, lingers to this day,” notes David Iler of Cyberwest magazine in a 1995 article.
###
Posted by ___ Restless Native at 7:23 AM