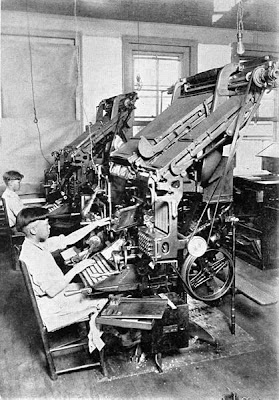 Talking with someone that lived this history

In talking with Ken Geddes about hot type newspapers and history years ago, I suddenly felt twinge of familiarity, a sense that I had been here before —“déjà vu all over again,” to paraphrase Yogi Berra.
I also realized at the same time that I was talking with someone that lived this history.
Maybe he was seeing if my story held up as well.
When I told him that I grew up in the “hot type environment” of the old Dolores Star, he asked a question about the form that held the type together for a page.
“What’s that called?
I mumbled something about a “turtle” or several pages being on a form, and switched gears to the linotype. It has been 30 years at least since my “printer’s furniture” and “hell box” days, and many of those years confused and immersed in a “cold type” soup. Mentioning that an old linotype from the forerunner of Gold Rush newspaper still resides in the town hall, I think, effectively deflected suspicion.
Geddes knew the Gold Rush newspaper— before it was the Gold Rush. His mother and father owned and ran the Cripple Creek Times-Record (which later became the Gold Rush) for about ten years starting on April 1, 1941. They purchased the paper from Bill Kyner and it was still a daily at that time.
“We went to the office the morning after we had settled the deal and realized we had to fill up eight pages in time to distribute by 5 p.m.,” wrote his mother Margaret Whitehill Geddes in her book “Gold Camp Indian Summer.”
“We discovered how our lives would be changed on the first day,” noted Margaret Geddes. Ken’s dad (also Kenneth) had been superintendent of schools for the Cripple Creek and Victor school district for a number of years prior to buying the paper.
“We met with the force, which included a foreman, two linotype operators, two men for general shop work — and then there was Freddie. The years go by we still fondly remember and quote Freddie, who admitted he had a difficult time with second grade.
“Freddie had a little boy, Eugene, who also had trouble with second grade. Eugene was bound to be musical, his daddy said, since he was ‘brought up around a piano,’” wrote Margaret Geddes.
When they shifted from a daily to a weekly, in the early part of World War II, they naturally faced complaints about the change.
“I remember Charley Searles, an old friend who had been an early mayor of Cripple Creek saying, ‘Well, a fellow has to die by Wednesday to make the news!’ Soon, however, people got used to having things ‘rationed’ for the war effort, accepted this as just another ‘sacrifice.’”
Ken himself, who for a time between his freshman and sophomore year at Colorado College, helped in the back shop. So chances are that he knew the answer to the question I mentioned earlier.
After reading his mother’s account of running the paper, I was tempted to give him a quick call with the answer.
“I believe it was a CHASE,” I would say identifying the steel frame in which a hot type printer form is made up. It is all coming back to me.
###
Posted by ___ Restless Native at 8:21 AM