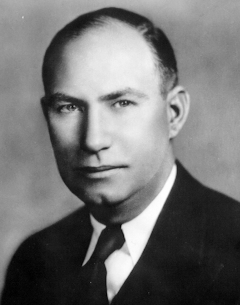 An investigation resulted in the conviction of a Denver Post reporter, a private detective, and an attorney on a charge of eaves-dropping on the governor

Labeled at the time as the “microphone scandal,” one of the most bizarre interactions between the press and historic Colorado politicians occurred during the administration of Teller Ammons.
Ammons, the youngest man ever to become Governor of Colorado (elected at age 39), shared some similarities with Teller County. Namely, both the governor, and the county, were named in honor of the same man — legendary U.S. Senator Henry Teller.
Henry M. Teller had been a close and respected friend of Teller Ammons father, Ellias M. Ammons. The senior Ammons was also Governor of Colorado from 1912 to 1914.
Teller Ammons, interestingly enough, had other Teller County connections in that, when he tried to get reelected for a second term, he lost his bid to another Teller County political legend, Ralph L. Carr, a onetime newspaper editor in the Cripple Creek and Victor mining district.
Teller Ammons was raised and educated in rural Douglas County on his father’s cattle ranch. Prior to his political career which began with his election to the state senate in 1930, he had worked in the newspaper industry in Denver, as well. In 1936, he was elected as a Democrat, to serve in the highest office in the state.
“The most publicized aspect of his administration was the “microphone scandal,” according his biographers at the Colorado State Archives, James O. Chipman and Erin McDanal. This investigation resulted in the conviction of a Denver Post reporter, a private detective and an attorney on a charge of eaves-dropping on the governor.
“In December, 1936, shortly before Ammons took office, Jack H. Gilmore, a private detective, and newspaperman Walden E. Sweet placed microphones in Ammon’s soon-to-be occupied statehouse suite. Both were reportedly in the service of Earl H. Ellis, an attorney. They later held their motive was a quest for information to prove wrongdoing among high state officials, although they ultimately uncovered very little,” says the state archives.
“Ammons had been puzzled because the names of his appointees were appearing in the Denver Post before the appointees, themselves had been notified.”
That and a tip from someone led to the office being searched and the discovery of two microphones and wiring leading down the ventilator shafts to an apartment belonging to attorney five blocks away. A grand jury indicted the three men responsible for the bugging of the office. They were convicted on eavesdropping charges and the attorney was disbarred.
Even after extensive review in the press, the recordings really turned up no negative information against the Governor.
“I don’t know to this day what they were trying to get on me,” Ammons noted at the time according to the archives. “It was embarrassing to a lot of people, but the worst thing was that my mother said ‘I didn’t know Teller used that kind of language.’”
###
Posted by ___ Restless Native at 3:24 PM