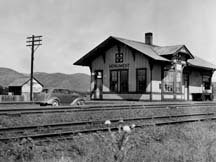 According to area historian Lucille Lavelett, the Monument Presbyterian Church bell was used to sound the alarm in early years when fire broke out in this area and as result, that bell’s toll signified the loss of a number of historic structures over the years.
The bell tolled the night the Monument Post Office burned in 1904 and then again in 1920 as it burned again. It rang out in 1921 when the original dressmaking shop of Mrs. Limbach was lost and again when the old Iron Side Hotel fell. On March 24, in 1922, Roy and Nellie Petrie heard the bell the evening the Monument Hotel was consumed by flames.
By contrast, in Palmer Lake no bell rang out in 1968 when that village lost one of its most historic structures. But fire was not culprit and the long lonesome whistle of a train may have been more fitting.
“After welcoming travelers for more than 60 years, the Palmer Lake depot is doing a little traveling itself these days,” wrote William Marvel of the Rocky Mountain News late in 1968.
“The ancient wooden structure, decorated with carved fancywork in the Victorian manner, has taken to flatbed truck and is being towed towards a final resting place in South Park.”
In its last years in Palmer Lake, the station was used as an office for the Santa Fe Railroad’s agent that relayed orders to passing train that never stopped. The railroad donated it to a Palmer Lake youth group and as soon as the group realized that its members had no way of getting it off the property, they advertised it ‘for sale.’
Denver advertising executive Shelton Fisher saw the ad and talked to the group’s leader who told him he was selling the building to the first buyer that showed up with $100.
Marvel’s story in the Rocky Mountain News quotes Fisher regarding his immediate interest.
“Thirty-nine minutes later, we were down there. I saw it from the highway and told my wife to write out the check,” he said.
His plans called for having a house mover relocate the structure with a trip of 120 miles that required special dispensation form Charles Shumate, who was then head of the Colorado Highway Department. Part of its route included traveling down uncompleted lanes of I-70 that was known then as the Hampden Avenue Extension, to avoid traffic.
“Once there, it will be set up along with another rail road relic – a wooden caboose given to Fisher by the Colorado and Southern Railway (Burlington),” noted Marvel’s story in the Rocky Mountain News.
Fisher planned to create a bunk house that would sleep ten and connect the two structures with a passageway between them for use as guest ranch of sorts for orphans.
Still, bells and whistles aside, the loss is real even if most can’t remember any of those buildings. It is nice to know where they were.
###
Posted by ___ Restless Native at 8:13 PM

Having read a column that I wrote earlier about moving the railroad depot in Palmer Lake, Marianne Zagorski wrote and provided a interesting postscript to the story.
“In ’66 my family and I moved from the USAFA out to Palmer Lake and eventually attended a town meeting, date of which I do not recall. It is a coincidence you should say “fire was not the culprit” because it almost was. Toward the end of the meeting a reminder was given of past business. ‘Don’t forget – our volunteer fire department will brush up on their skills on (date) when the depot will be set fire. Everyone come.’
“Never shy, I jumped to my feet and had my say. In the interest of brevity, I will condense what ensued into: hostility, sharp words, disbelief and a final acquiescence in accepting my plan of putting it up for sale. ‘But remember, you only have two weeks, then we burn it. And you are limited to $100 – tops.’
Zagorski countered.
‘But why tie my hands? You already made it clear your funds are at a low ebb. I guarantee I can get you much more.’
“TWO WEEKS – ONE HUNDRED DOLLARS!”
“Yes sir.”
Zagorski said that they did have a good point about the dangerous condition of the building and how it would be expensive to rectify.
“But I knew my market and lost no time calling The Denver Post Sunday Empire section which also lost no time sending a reporter and photographer to meet me. I was aware of everything dealing with trains was high on their list of priorities. So on the earliest Sunday, there was a good photo and article on a full page.”
The article had the desired effect.
“Early in the morning the phone started ringing and continued for days. Of course, I had to accept the first caller for which I was truly sorry when the second caller was the moving force behind the opening of Woodmoor. He was offering really big money (as many did) if only I would let him have it. He wanted it for the narrow gauge tracks and train he was planning to run around his lake. Even though he never realized that idea, The Depot would have remained here.”
Thus, the depot was saved from the torch.
“I do not recall anything at all said to me by the Palmer Lake commission members when I handed over the check. Not then or later. But I had accomplished my goal.”

I have ties to both Palmer Lake and South Park and am curious where the depot was moved.