On truth and good stories 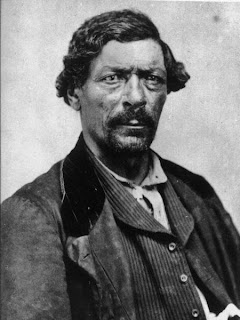 Jim Beckwourth crossed all cultural barriers during his 68 years

James P. Beckwourth had a reputation for being able to tell a good yarn.
And that was exactly what he did in dictating his autobiography to Thomas Bonner. Bonner, a Justice of the Peace in the California Gold fields. Of course, he was obliged to add or ‘improve’ certain details about himself in “The Life and Adventures of James P. Beckwourth, Mountaineer, Scout, and Pioneer, and Chief of the Crow Nation of Indians.”
Amazingly, most of it contained elements of truth.
“… While Beckwourth certainly had a tendency to exaggerate numbers or to occasionally make himself the hero of events that happened to other people, later historians have discovered that much of what Beckwourth related in his autobiography actually occurred,” according to beckwourth.org.
Born April 6, 1798, in Fredricksburg, Virginia, (his father an Irish American plantation owner and his mother, a Negro slave) Jim Beckwourth was educated by his father and could read, write and spoke Spanish, French and multiple Indian dialects. For eight to nine years, Beckwourth lived with a Crow band. He rose in their society from warrior to chief (a respected man) and leader of the "Dog Clan". According to his book, he eventually ascended to the highest-ranking war chief of the Crow Nation.
“An often-told story has it that when the book appeared, a group of miners who were well-acquainted with Beckwourth, commissioned one of its members to pick up a copy while on a trip to San Francisco. But the man, being careless, got a copy of the Bible instead. In the evening, he was requested to read aloud from the long-awaited book, and opening it at random, he hit upon and read the story of Sampson and the foxes,” according to beckwourth.org.
“That’ll do!” one of the men cried. “I’d know that story for one of Jim’s lies anywhere!”
One local story, told by Beckwourth himself, involved the legend of Jimmy Camp. Beckwourth related a tale of Jimmy Boyer (other historians have said his last name was Hayes or Daugherty) “a little dwarf Irishman” who had established a cabin and fort about 10 miles east of what is now the center of Colorado Springs. Jimmy would trade items brought from ‘civilization’ to trade with the Indians for furs.
“His wagon train would follow a segment of the Cherokee Trail (before it was the Cherokee Trail) north from the Pueblo area, and his route was called Jimmy Camp Trail, which gave the name to Jimmy Camp Creek,” writes Perry Eberhart in “Ghosts of the Colorado Plains.”
Jimmy would then light a bonfire on the top of a hill to signal that he had returned and it was time to trade. By all accounts, the Indians liked and trusted Jimmy.
Sometime from 1833 to 1835, however, Jimmy was murdered by Mexican bandits, it is believed.
According to Beckwourth, he and Indian friends of Jimmy, tracked down the murders, slit their throats and hung them by their toes in a nearby tree.
Today, the James P. Beckwourth Mountian Club of Denver pays tribute to the noted storyteller.
“Jim crossed all cultural barriers during his 68 years, and the Club incorporates his life in its activities by storytelling, historical re-enactment and written materials,” says the club’s literature.
###
Posted by ___ Restless Native at 8:37 PM