Martial law declared in the district 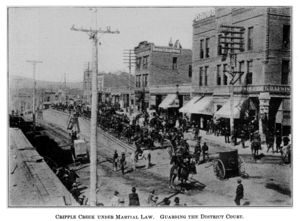 June 8, 1904, at 2 a.m., Adjutant-General Sherman M. Bell declared martial law in the Cripple Creek Mining District.
“Bell, accompanied by a detail of staff officers, is on his way to Cripple Creek bearing acting Governor Hagott’s proclamation of martial law for the district,” reported the June 8 Victor Daily Record.
“He has instructions to use his judgment as to the need of issuing the proclamation and if he decides that conditions warrant it to place the gold camp under the reign of the military for the second time since the strike of the metalliferous miners began last August.” read the nutgraph under a banner headline.
According to the paper, Bell arrived by ‘special’ at 1:20 a.m. in that morning. “Bell and his escort went immediately to the military headquarters. ... After going over the situation with the officers at military headquarters, martial law was declared.”
Another story commented, “Yesterday was without doubt one of the most strenuous days in the history of the city of Cripple Creek. During the recent occupancy of the city by the military no such excitement prevailed at any time as was manifested throughout the past twenty-four hours. The spectacle of large bodies of armed men, many mounted, parading the streets with Western Federation miners kept the populace on the qui vive all day. Incidents that under ordinary circumstances would furnish column stories for the newspapers were relegated to brief line notices or ignored entirely.”
Under another headline in the same paper reading, “Pictures give rise to talk of conspiracy,” a story points to official assertions suggesting that miners working despite the strike were targeted by the Union.
“The men on these pictures are mostly all numbered and their names are listed on the backs of the pictures. Those who have become union men since the pictures were taken, their names have been scratched out, as are also those who have been killed since that time,” said the Record.
“The mine owners and the military are holding these pictures and indicate these men were marked to have been killed at some opportune time and that the crosses were marked opposite the names of the killed simply to check them off.” Interesting reportage, given the fact that The Victor Record is widely considered by historians to be a pro-union paper.
###
Posted by ___ Restless Native at 7:34 PM