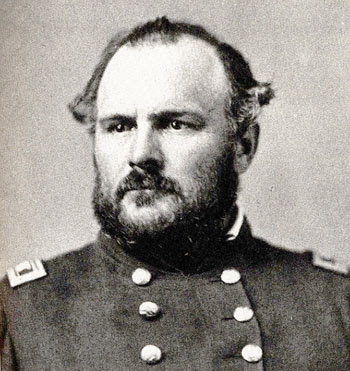 John M. Chivington was a beady-eyed badger of man with a history of contradiction. Early Coloradans knew him alternately as the “hero of Glorietta Pass,” and “the butcher of Sand Creek.” As Methodist minister, he wielded revolvers from the pulpit, turned down a “praying” commission in the first Colorado Volunteer Regiment of the Union Army for a “fighting one,” and carried great contempt for slavery but advocated genocide.
For about two years beginning in 1865, he owned much of what now the western portion of the city of Manitou Springs.
Ordained by the Methodist Church in 1844, he served as a frontier minister establishing congregations and building churches in the growing west.
“Chivington’s contempt for slavery and talk of secession caused him enormous trouble in Missouri,” according to New Perspectives on The West, a PBS film research project. “In 1856, pro-slavery members of his congregation sent him a threatening letter instructing him to cease preaching. When many of the signatories attended his service the next Sunday, intending to tar and feather him, Chivington ascended the pulpit with a Bible and two pistols. His declaration that ‘By the grace of god and these two revolvers, I am going to preach here today’ earned him the sobriquet the ‘Fighting Parson.’”
His frontier church building duties for the Methodist Church eventually landed him in Denver and when the Civil War began, territorial Governor William Gilpin commissioned him.
He rose quickly among the ranks and as a Major, Chivington commanded a group of 400 soldiers that slipped behind Confederate forces in Glorietta Pass in eastern New Mexico by repelling down canyon walls in a surprise attack that cut off the Confederate supply train. The troops under his charge end up capturing or destroying 500 Rebel horses and mules and 80 wagons loaded with ammunition and food. The Confederate troops were forced to withdraw down the Rio Grande to Texas.
The battle became known as the ‘Gettysburg of the West’ and Chivington and the Colorado Volunteers returned to Denver as heroes.
In Denver, many gold seekers and settlers had reset their sights on a new enemy, as tension between the Cheyenne Indians and the growing white population began to bubble over. Denver newspapers called for the “extermination of the red devils” in front page editorials and urged readers to “take a few months off and dedicate that time to wiping out the Indians.”
Chivington himself was in agreement. “The Cheyennes will have to be roundly whipped – or completely wiped out – before they will be quiet. I say that if any of them are caught in your vicinity, the only thing to do is kill them.”
In late November, 1864, Chivington put his harsh words into action, as his troops attacked well known ‘peace’ Chief’s” Black Kettle’s band of Cheyennes on the banks of Sand Creek in what is now Kiowa County despite the fact that Black Kettle’s band flew an American flag and a white flag of truce over his lodge.
Afterward, the Joint Committee on the Conduct of War, which investigated the incident along with other military investigations, declared:
“Whatever influence this may have had upon Colonel Chivington, the truth is that he surprised and murdered, in cold blood, the unsuspecting men, women and children on Sand creek, who had every reason to believe they were under the protection of the United State authorities, and then returned to Denver and boasted of the brave deed he and his men under his command had performed,” wrote the Committee.
According to Ask.com, Chivington proclaimed before the attack “Kill and scalp all, big and little; nits make lice.” Between 150 and 184 Cheyennes were reportedly killed and some were mutilated. Most were women, children and elderly men. Chivington and his men later displayed scalps, human fetuses, and genitalia in the Apollo Theater in Denver.
A military tribunal and the earlier-mentioned Joint Committee, condemned Chivington and his men for the massacre but no formal charges were ever brought against him. He was forced to resign his commission and back completely away from state politics to which he originally aspired.
On December 1, 1865, he purchased eighty acres that included natural springs in the Manitou area for $1,800 from pioneers Thompson and Sarah Girten. Chivington kept the property only for about two years and sold it for a loss at $500. Later, in 1884, he sued Manitou Mineral Water Company for water rights that he claimed he still owned. The courts, however, disagreed.
After moving first to Nebraska, then California, then back to Ohio where he farmed and edited a small newspaper, and finally returning to Denver and working as a deputy sheriff, he died of Cancer and is buried in Fairmont Cemetery in Denver.
###
Posted by ___ Restless Native at 2:12 PM