Bankrupt more than the English language 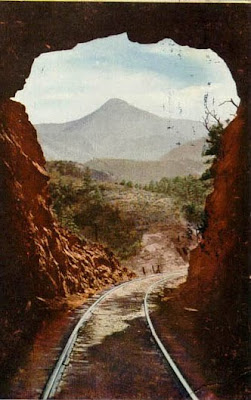 Despite its scenic excellence, the ‘Short Line’ had a very limited life span

Fame is a magnifying glass that can, over time, wither something away to nothing. Or depending on a tender substance’s stability, ignite and eliminate it in a puff of smoke.
Almost literally at the turn of the century, Jan. 4, 1900, Irving Howbert turned the first shovelful of dirt on Colorado Springs & Cripple Creek District Railway Company. By April 8, 1901, the railroad commonly known as ‘The Short Line’ began operations on the brief but ‘storied’ line.
Some of the stories are true; but many are as spurious as some hard-luck miner’s explanation of what happened to his fortune and the related could-have-beens.
A rail jaunt along the these tracks became known as “The Trip which bankrupts the English Language.,” a phrase that is often attributed to Teddy Roosevelt who visited Victor and the Cripple Creek District on at least two different occasions via this rail route.
Despite its scenic excellence, the ‘Short Line’ had a very limited life span. By 1922, declining gold ore shipments forced abandonment of the rails.
W.D. Corely, Sr., of Colorado Springs, bought the railroad in 1922 and junked the rails and equipment to convert the roadbed into a scenic highway. Corely operated it as a toll road under permit with the U.S. Forest Service until 1939, when it reverted to the public as a free road, by terms of his permit.
A 1946 article in Highway Magazine by Ray Colwell, noted the difficulties involved in building the original road.
“There were few places where locating engineers could not avoid the necessity of tunneling through the Pikes Peak granite. Tunnels were decided upon only as a last resort, for the Short Line was built entirely with hand labor, churn drills, black powder and horse drawn dump carts. Tunnel construction was slow and costly, but nine of them, ranging up to 550 feet in length, were finally completed,” wrote Colwell.
All of the high trestles, which carried the railroad, have since been filled or bypassed and the road has been rerouted around the various tunnels over the decades.
“Designed for the standard gauge railway, they (the tunnels) were large bores and required a great many 12 x 12-inch timbers of coast fir to hold the badly cracked rock, especially close to the portals. Although the good circulation of dry air 8,700 feet above sea level minimized rot, the crushing weight eventually had its effect. Some of the 12-inch timbers were compressed to 6 inches or less in thickness and three of the tunnels gradually became unsafe for public use. Two of them were bypassed by rerouting the traffic over existing roads but “Tunnel Six” could not be replaced so easily,” recalled Colwell in the 1946 article.
This meant whittling several hundred feet of shelf road out of almost vertical cliff.
“Three men and a foreman, using modern equipment and high explosives, built 1,000 feet of new road under very difficult conditions in 200-man-days. They moved 4,700 yards of solid rock and 500 yards of loose rock and dirt with the aid of 3,100 pounds of C-3 plastic explosive,” he said of the tunnel rerouting in the late 1940s.
Tunnel Three partially collapsed in 1988 and an eight-mile section of the original road was closed as a result. The Old stage Road began being used as an alternate way of getting around this section.
In 1997, a group wanting to raise money to fix the tunnel and the U.S. Forest Service responded with a multi-use plan in 1999 that supported this effort.
In 1998, a group called the Short Line to Cripple Creek, Inc. successfully nominated the entire road as a National Historic Place.
Because of failure to secure enough funding for the repairs to the tunnel and controversy over what should be done, a new “scoping report” was ordered in late 2000 to look at the social and recreational impacts of repairing the road.
On February 13, 2006, a fire destroyed much of the timber supports in Tunnel Three and though arson was assumed to have caused the fire, the tunnel was then too dangerous to conduct a proper investigation.
Among the fables surrounding the road and the tunnels is a tale of a mythical school bus filled with elementary students on a field trip from a Cripple Creek elementary school that was buried in a tunnel collapse on Tunnel Three. Hauntings, characterized by bleeding walls, fingerprints on cars, giggling and laughing of school children in the first two tunnels and screams from Tunnel Three. No such accident ever occurred.
Additionally, the area has gained a reputation as a ‘body dump’ for homicide victims according to the lore. Recently, in February of last year, hikers found a human jaw bone and later Police investigators, using cadaver dogs, located additional human remains including ribs and long bones in the general area according to reports at the time.
###
Please see the following related posts:
• Monopoly or the Short Line
• Teddy visits Victor
Posted by ___ Restless Native at 6:44 PM

I love reading your blogs. As children, we rode this road, explored these tunnels and hikes these mountains daily. We lived right off Gold Camp Road and it was our playground.