Hold the fort and pass the ammunition 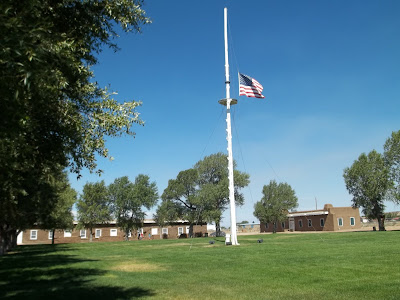 Protect against forces unknown, destination on map to rendezvous


“A clear cold morning with high wind: we caught in a trap a large gray wolf, and last night obtained in the same way a fox who had for some time infested the neighbourhood of the fort.”
__ Meriwether Lewis

That was before Colorado, of course, which was a wild place back then. Even 60, 70, 80, even 90 years later … a fort seemed like a good idea. Hold down the fort. Wall off the dangerous world for a time. It served as a place to trade, to protect oneself against the forces of the unknown, a destination point on the map to rendezvous.
At least seven locations in the state still bear the “Fort” name officially. Many more carried it for a time. Following is a quick list that I can think of pulled together with information from Geo. R. Eichler’s excellent book, “Colorado Place Names”, and “A Colorado History,” by Carl Ubbelohde, Maxine Benson, and Duane A. Smith.
• Fort Collins – Organized as a town in 1872, but before that it started as an Army camp connected to Fort Laramie in Wyoming with two companies of the 11th Ohio Volunteer Calvary. Known as Camp Collins first, after Col. W.O. Collins, the commander for Fort Laramie at the time. Later it was known as Fort Collins and retained the name long after the military post was abandoned.
• Fort Lupton – Lancaster P. Lupton was a lieutenant for Col. Henry Dodge’s 1835 expedition to the Rockies. Taking a leave from the Army in 1836 or ‘37 and established what he called Fort Lancaster. The trading post was abandoned in the early 1840s but the surviving adobe building continued to be used as stage stop on the route from Missouri to Denver 20 years later.
• Fort Uncompahgre – On the Gunnison River, near what is now Delta, Antoine Robidoux built Fort Uncompahgre in the mid 1820s.
• Fort Davy Crockett – In Brown’s Hole in the extreme Northwest corner of Colorado, this fort provided a base for beaver trappers. This post was short-lived and so restricted in attractions that many of the trappers called it Fort Misery.
• Fort St. Vrain – About six miles northwest of the present town of Platteville, the Bent, St. Vrain and Company built a fur trading post on Platte and called it Fort Lookout. It was later changed to Fort George and then to Fort St. Vrain.
• Fort Jackson – Only 10 miles from Fort St. Vrain, this outpost was created by St. Vrain competitor Fraeb and Sarpy. In 1838, St. Vrain bought them out in the area and pushed fur business toward his own namesake.
• Fort Crawford – General R.S. Mackenzie, with six calvary companies and nine of infantry, moved into the Uncompahgre River Valley. The troops were there to help the Indian agents, if necessary, complete the removal of the Utes to reservations in Utah and southwestern Colorado. On Sept., 7, 1881, the last of Utes pass the junction of the Colorado and Gunnison rivers. Congress declared former Ute lands public and open for filing in June of 1882, but many settlers had already moved in and plotted towns in anticipation of the San Juan silver rush.
• Fort Pueblo – In 1854, minor conflicts between Indians and white settlers erupted into what became known as the Fort Pueblo Massacre. On Christmas Day, a celebration at the fort became a bloody fight in which 15 settlers were killed and the Indians carried a woman, and two boys away. General John Garland, the commander at Fort Union in New Mexico, marched against the Indians, but relations improved with an unratified treaty negotiated by Kit Carson and New Mexico Governor David Meriwether.
• Fort Lewis – When first created in 1877, it was located where Pagosa Springs is now. Named after Lieutenant Colonel William H. Lewis, a descendant of Meriwether Lewis. It was moved to 12 miles southwest of Durango, but abandoned several years later. The school on the hill above Durango still sports the moniker.
• Fort Morgan – In 1865, the post that was first called Camp Tyler became Fort Wardwell but was renamed a year later in honor of Col. Christopher A. Morgan of the United States Volunteers.
• Fort Massachusetts – The original location of this post in 1852, was between two mountains and away from Indian trails. They found a more strategic location six miles south and west, at what became Fort Garland.
• Fort Garland ­– Its namesake, John Garland, commanded the military district when it was founded in 1858. Kit Carson was the commander here from 1866-67. The post was abandoned in 1883, but the name was retained for the surrounding community.
• Fort Lyon – Col. William Bent left his trading post on the Arkansas River and moved downstream about 40 miles and established Bent’s New Fort. When it was leased to the Army, it was renamed Fort Fauntleroy after a colonel of the First Dragoons. The government bought the site in 1859 and renamed it Fort Wise for Henry Wise, the governor of Virginia. It was later renamed Fort Lyon in honor of Gen. Nathan Lyon, the first Union soldier killed in the Civil War. In 1866, the river undercut the bank and the Fort was once again moved 20 miles up river. Kit Carson died here May23, 1868, at the age of 58.
• Fort Carson – After World War II, with 60,000 acres in military reservation near Colorado Springs at Camp Carson providing training facilities for the 89th, 71st, and the 104th divisions was of course named for frontier scout and military leader Kit Carson. In 1954, the Defense Department designated it as a permanent installation and renamed it Fort Carson.
Interestingly enough, Kit Carson has a lot more than forts named after him including the following:
• Kit Carson County, Kit Carson Peak, town of Kit Carson in Colorado • Carson City, Nevada • Carson Pass in Nevada and California • Kit Carson, city in California • Mount Kit Carson in Washington • Carson National Forest in New Mexico • Carson River in California and Nevada
###
Posted by ___ Restless Native at 6:43 PM