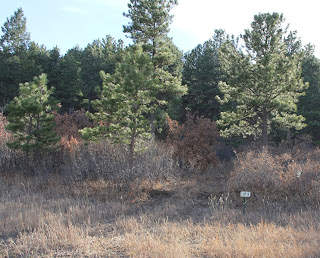 In answer to a lawsuit filed in mid October in El Paso County District Court by a local homeowners association, the town of Monument's attorney denies that the Town would proceed with plans to build a water tank unless the proper authorization was obtained.


According to court documents filed Oct. 12, the Forest View Estates Neighborhood Association Filing IV, Inc. complaint says that at a Sept. 6 meeting of the Monument Board of Trustees, a expenditure of $204,000 was approved for the purchase of land for water tank site.
"Monument purchased Lot 6 (in Forest View Estates) with the intention of constructing thereon a water storage tank for incorporation into Monument's water supply," the court documents filed by the homeowners association claim.
"The properties in Forest View Estates, Filing IV, including Lot 6, are encumbered with a Declaration of Protective Covenants ...  Lots shall be known and described as residential lots and shall be used only for private, custom, site-built homes."
Through counsel, Gary Shupp, in early November the town answered saying, "the matter is not ripe for judicial review as the (town) has done nothing beyond acquiring the land to preserve the price and presented a plan at an informal meeting. No formal plan has been presented to to the Association nor has any plan been formally acted upon by the association."
Further, counsel for the town suggests that the town could "elect to proceed through eminent domain in a separate action in which case, if successful, ... would be allowed to proceed without being barred by the covenants."
The town's attorney says "the lot is unique in that its elevation is the elevation needed for a water tank but the Town made the purchase to preserve the price of the land and proceed with the process to see if the tank could be constructed there after obtaining approval of the Association, possibly through amendments of the covenants, or an appropriate court order. The Town denies that it intended to unilaterally build a water tank on the site without the proper authorization."
Further, court records show, in answer for the town to the complaint, it "admits that some residents met with the Town Manager who discussed the possibility of building a tank at that site and who asked that he be allowed to present a concept to show how the tank could blend in with the development and benefit the residents by providing a source of fire protection." But "again denies that the Town would proceed with the plans unless proper authorization was obtained."
The matter was expected to be considered at the Monument Board of Trustee's meeting on Monday night, (Nov. 7,) after press time.
Sidebar Separate, but related story. 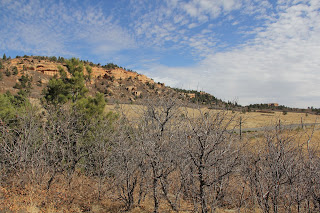 Photo information:
Miller says that a large Monument-owned, partially-buried tank at that location above Colorado State Highway 105 and railroad right-of-way, would not detract from Palmer Lake's views and charms.


In the meantime, Forest View Company's president Dave Miller, has suggested an alternate site for a possible water tank by the Town of Monument, in Palmer Lake.


Forest View Company is the developer of Forest View Estates multiple filings.
"Mr. James Fitzgerald indicates he would consider selling and using his vacant site in Palmer Lake for a new Monument water storage tank," say a letter to the town of Monument.
"This commercial property is substantially superior to Monument's recently purchased residential resale Lot No. 6 in El Paso County's Forest View Estates Filing IV custom home subdivision..."
Making his case to the town in a letter dated Oct. 26, Miller says:
• A large Monument-owned, partially-buried tank at that location above Colorado State Highway 105 and railroad right-of-way, would not detract from Palmer Lake's Views and charms;
• The overlooked joint water supply and delivery uses of this proposed tank for Monument, Palmer Lake and other Northern El Paso County water providers are substantial and unprecedented;
• This tank's connecting pipeline to serve Monument would also give Palmer Lake a no-cost, joint-use opportunity to serve its southeastern residential and commercial well users with high-quality, low-cost, renewable surface waters whenever available, from its originally-owned railroad reservoirs and water rights;
• Northern El Paso County's nearby Forest View Acres Water District's largely renewable surface water system from South Monument Creek could also be synergistically interconnected with a Palmer Lake to Monument storage and delivery system;
• A joint use water tank for Monument and Northern El Paso County is consistent with the original basic objectives of all Pikes Peak Regional Water Authority members, including Colorado Springs Utilities, to obtain sustainable, high-quality, surface water supplies for both human and environmental needs, as soon as possible, without adversely impacting Southeastern Colorado's farms and environments.
Miller has been a contract developer for the state Board of Land Commissioners since 1993, and water and energy planner in the state since 1985.