Timing for student paper's endorsement results in trial by fire 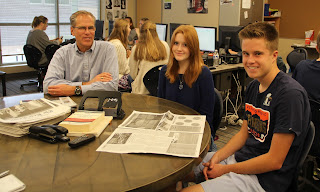 In the news game, timing is everything.
Student journalists at Palmer Ridge High School involved in producing the October monthly edition of The "Bear Truth" found out that in best way possible — trial by fire.

When "The Bear Truth" editorial board made the decision to endorse Hillary Clinton for president, it knew it would get some response.
"We weren't sure what would happen," said Evan Ochsner, one of two co-editors-in-chief. "We weren't trying to be divisive. We weren't out to attack anyone. We felt, however, it was important to voice an opinion."
He said he did hope the board's writing would have impact.
"When you publish something controversial, you expect some feedback." But a month earlier,  he noted, with an editorial on global warming, the "Bear Truth" didn't get any comments.
"Writing is my passion and I do enjoy a real conversation about issues. Discussion is a chance to change and shape the narrative," Ochsner said. He plans to make journalism a career.
Fellow co-editor-in-chief, Anna Schnelbach, who is considering law school, also sees it as a once-in-a-lifetime learning experience.
"I definitely, in some way, want to have an impact," but in this case, it was jarring.
"When it first appeared, and the early response was negative, I felt I had been sucked into this tunnel, this rabbit-hole of controversy and intense attention," she said.
In the interest of timing, the editorial was a long time coming.  More than a year ago, under a previous editor, "The Bear Truth" had decided it would be important to make political endorsements, particularly with the national elections waiting in the wings.
To that end, they established a nine-person editorial board that included each of the section editors, co-editors in chief, and business manager. They produced editorials, including other endorsements, in previous editions in the warm up to the main event — the selection of an endorsement for the office of the president of the United States.
They met on three different occasions to consider a presidential endorsement, and had, as a group, followed the election season from the beginning. At the final one of those meetings, a straw poll among the nine, was pretty decisive, though there was dissent.
The students also didn’t expect to make national news after originally publishing the endorsement in the Oct. 12 issue.
Soon after the endorsement was published, it exploded with comments on two local parent Facebook pages, and their own site.
"The Bear Truth’s website was overwhelmed with comments about the editorial, as website traffic increased 2000 percent. Administrators and school board members received numerous emails regarding the editorial,” the paper reported.
The Colorado Springs Gazette was the first to break the story, when it published an article about the editorial and the stir it caused. The Gazette article appeared on their website on October 18, and ran on the front page of their Oct. 19 issue.
On Wednesday night, The Denver Post picked up an AP version of the story. KRDO featured "The Bear Truth" on their evening news that day, as did KOAA, and Colorado Public Radio.
"On Thursday, "The Bear Truth" attended Journalism Day at Colorado State University, in Fort Collins, an annual convention put on by the Colorado Student Media Association (CSMA). During the opening ceremonies, adviser Tom Patrick and co-editors-in-chief Evan Ochsner and Anna Schnelbach were called up to the stage, where CSMA executive director Jack Kennedy presented them with a black, peace armband signed by Mary Beth Tinker of Tinker v. Des Moines fame.
Mary Beth Tinker is an American free speech activist known for her role in the 1969 Tinker v. Des Moines Independent School District Supreme Court case, which ruled that Warren Harding Junior High School could not punish her for wearing a black armband in school in support of a truce in the Vietnam War. The case set a precedent for student speech in schools.
"The armband is an icon of free speech, and was presented to “The Bear Truth” as a special recognition from CSMA," the Bear Truth reported online.
That same evening, Ochsner addressed the D-38 School Board on behalf of the editorial board during public comments.
Friday, the Denver Post lauded the student paper's efforts in an editorial of their own. National and local media outlets were continuing to contact the paper last week with additional interest.
As far as news game, not-at-all bad timing, considering most of this took place during "Free Speech Week," a yearly event to raise public awareness of the importance of free speech in our democracy and to celebrate that freedom. 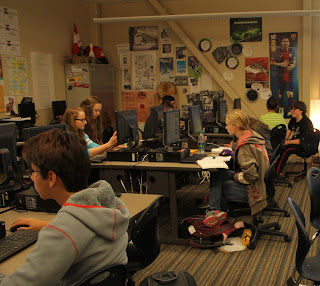 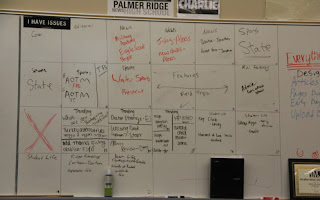 Photos and story by Rob Carrigan

Photo Information:
Photo 1: Last week “The Bear Truth” was hard at work on another edition for November. From left: adviser Tom Patrick and co-editors-in-chief Anna Schnelbach and Evan Ochsner, at the front table.

Photo 3: The entire student staff of "The Bear Truth" experienced some of repercussions of the endorsement.

Photo 4: White board in “The Bear Truth’s” classroom plans content for the November edition.